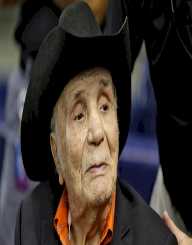 American middleweight champion and professional boxer Jake LaMotta was born in New York City on the 10 July 1922 into an Italian immigrant family. LaMotta grew up in the Bronx, and his father used to encourage him to fight other boys as a form of entertainment. Later, LaMotta was sent to a reform school and while there refined his boxing skills.

LaMotta was a gifted amateur boxer who remained undefeated in amateur bouts. Then in 1941, age 19, LaMotta turned professional.

LaMotta had three bouts against Jimmy Reeves, losing the first two bouts and knocking Reeves out in the third. Sugar Ray Robinson beat him at Madison Square Garden. New York on the 2 October 1942, which was Robinson's middleweight debut. At a rematch on the 5 February 1943 at Olympia Status in Detroit, LaMotta won, and Robinson experienced the first loss of his professional career. The pair’s third encounter, on the 26 February 1943 in Detroit, was a close fought match which Robinson won by a unanimous decision. Their fourth bout took place on the 23 February 1945 in Madison Square Garden, New York, and Robinson was again the victor. They fought again on the 26 September 1945 and lasted 12 rounds with Robinson being declared the winner in a controversial decision. LaMotta then fought Billy Fox on the 14 November 1947. There was general suspicion that the fight had been fixed and the New York State Athletic Commission suspended LaMotta.

On the 16 June 1949 in Detroit, Michigan, LaMotta defeated Marcel Cerdan and won the World Middleweight title. There was no rematch with Cerdan because, on his way to the United States for the bout, his plane crashed over the Azores, and he was killed. Instead of Cerdan, LaMotta defeated his title against Tiberio Mitri on the 7 July 1950 at Madison Square Garden in New York which he won. His next fight was about Laurent Dauthuille against whom he successfully defended his title. In 1951, LaMotta again faced Robinson at Chicago Stadium on the 14 February. Robinson won by a technical knockout in the 13th round, and the fight went down in boxing lore as the St Valentine’s Day Massacre.

After losing his World Middleweight title, LaMotta challenged the Light Heavyweight title but lost in his first attempt when he fought Bob Murphy. LaMotta went on to be Hayes, Murphy, and Hairston. LaMotta was beaten by Danny Nardico on the 31 December 1952 and won two more against Johnny Pretzie and Al McCoy before retiring in 1954.

Once he had retired from professional boxing, LaMotta was involved in the entertainment industry. LaMotta acted on stage and film,  worked as a stand-up comedian and also managed bars. LaMotta had a small role in Paul Newman’s film The Hustler (1961)

The FBI investigated him because of the Billy Fox bout and Mafia links. In 1960 he was called to testify before a Senate committee examining crime and boxing.

Jake LaMotta wrote an autobiography Raging Bull (1970) which was adapted for film with Robert De Niro portraying LaMotta. He was inducted into the International Boxing Hall of Fame in 1990. LaMotta was married seven times. He has six children: two sons and four daughters. Tragically in 1998, LaMotta lost both his sons. Jake LaMotta Jr (51)  died of liver cancer in February, and his younger son Joseph LaMotta (49) died in a plane crash in Nova Scotia that September. LaMotta died on the 19 September 2017 at the age of 95.