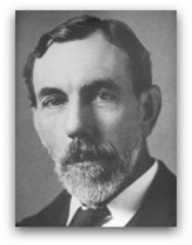 William Ramsay was a British chemist who is best known for discovering argon and isolating the elements helium and xenon.

William Ramsay was born on 2 October 1852 in Glasgow, Scotland. He was the son of Catherine née Robertson and William Ramsay. Ramsay’s father worked as a civil engineer. Ramsay received his early education from the Glasgow Academy. Upon graduation, he attended the University of Glasgow. Ramsay pursued further education in Germany and continued his studies at the University of Tubingen. In 1879, he became the professor of chemistry at University College Bristol and also worked as principal there.

In 1894, he had isolated an element of air which had been previously unknown. The new component appeared to have no chemical reactivity upon early testing, due to this Ramsay named it argon, which comes from the ancient Greek for lazy. Argon’s chemical inertia made it the perfect filament for vacuum light bulbs.

William Ramsay would also go on to isolate and discover the elements, krypton, and xenon. These discoveries of the noble gasses earned Ramsay a Nobel Prize. Ramsay’s discoveries make up group 18 of the Periodic Table. Ramsay is also credited with being the first person to find and isolate helium on earth.

Helium had previously been identified as existing in the spectrum of the sun. The discovery of helium led to it replacing the much more dangerous and flammable, hydrogen, in a majority of rigid airships. Ramsay also characterised the element radon. He was an advisor in the setting up of the Indian Institute of Science.

In 1905, William Ramsay gave an endorsement to the Industrial and Engineering Trust Ltd. The company aimed to gather gold from seawater. Despite a massive investment along the southern English coast the company predictably failed to produce any gold. In 1911, Ramsay became the president of the British Association.

William Ramsay married Margaret Johnstone Marshall in 1881. Together they had two children, a daughter, Catherine Elizabeth and a son, William George. Ramsay developed nasal cancer and succumbed to the disease on 23 July 1916. He died in High Wycombe, Buckinghamshire, where he and his family had lived for many years.

The vacuum grease, Ramsay Grease, is named in honour of Ramsay. It is used as a sealant for glass laboratory equipment. William Ramsay was made a knight commander of the British Empire and thus earned the title, Sir William Ramsay. In 1895, he was awarded the Davy Medal from the Royal Society of London.

His crowning achievement came in 1904 when Ramsay won the Nobel Prize in Chemistry for his discovery of the element argon and contribution to the study of inorganic chemistry. A local school in Buckinghamshire was named in his honour.