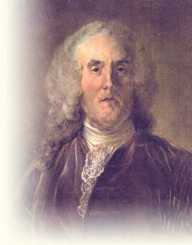 Swedish astronomer Anders Celsius was born on November 27, 1701, in Uppsala. His father was a Swedish astronomy professor Nils Celsius, and his grandfathers were mathematician Magnus Celsius and astronomer Anders Spole. His family influenced him to choose a career in science.
From an early age, Celsius was talented in mathematics. He enrolled to study at the Uppsala University, where his father was also a teacher. Years later, in 1730, he also became a professor at the University, more precisely, an astronomy professor.

After starting his work at Uppsala University, Anders Celsius began to publish several important works. In 1720, he published the Nova Methodusdistantiamsolis a terra dererminandi – New Method for Determining the Distance from the Earth to the Sun. He and his assistant Olof Hiorter conducted a study on the auroral phenomena and suggested a connection between the aurora borealis and changes in the magnetic field of the Earth.

Anders Celsius' work also included observation of a compass needle, finding that larger deflections correlated with stronger auroral activity. Celsius published 316 observations about aurora borealis during the years between 1716 and 1732.

Besides his work at the Uppsala University, Celsius often traveled to the major European observatories, mainly in Germany, Italy, and France. While visiting Paris, he advocated the measurement of an arc of the meridian in Lapland. He also joined the expedition of French Academy of Sciences to measure the degree of latitude. The aim was to measure the length of a degree along a meridian, close to the pole. The expeditions compared results with similar results from an expedition to Peru and confirmed the belief of Isaac Newton that the Earth’s shape is ellipsoid flattened at the poles.

After his expeditions, Anders Celsius published De observationibus pro figuratellurisdeterminanda – Observations on Determining the Shape of the Earth. This publication in 1738 won Celsius a lot of respect in Sweden, both amongst the government and his peers. It generated a lot of interest in his work, and the Swedish authorities began to donate resources to construct an observatory in Uppsala. His work became successful, and in 1741, Celsius founded the Uppsala Astronomical Observatory. The observatory was equipped with the most modern instruments of the period, which he mainly purchased during his voyages abroad.

As an astronomer, Celsius began observing the magnitude of specific stars using colored glass plates. He was the first to attempt measuring the intensity of starlight with a tool other than the eye. Using his photometric system, Celsius made observations of around 300 eclipses and other astronomical objects, which was thoroughly cataloged and published.

One of his best-known work is the definition of the international temperature scale. Anders Celsius began to perform and publish experiments based on scientific grounds. He reported that the freezing point is independent of latitude and atmospheric pressure. He also found that boiling of water depends on the atmospheric pressure. He proposed the Celsius temperature scale to Royal Society of Sciences in Uppsala. His thermometer was calibrated from 0 to 100 degrees. He initially called his scale a centigrade (Latin for “hundred steps”), but for many years it was known as the Swedish thermometer.

Anders Celsius made several important discoveries during his life. He was first to note that Scandinavia is slowly rising above sea level and that it is a continuous process. He was also the secretary of the Royal Society of Sciences in Uppsala and supported the founding of Royal Swedish Academy of Sciences in Stockholm. Celsius died of tuberculosis in 1744.