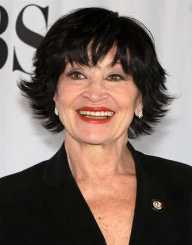 Chita Rivera was born on January 23rd in 1933. She earned her fame for being an American actress, singer and a dancer. In her acting career, Rivera is best remembered for her theatrical performances. Rivera went on to become the first Latino American woman to be bestowed with a Kennedy Center Honors award in late 2002. Similarly, she was presented with the Presidential Medal of Freedom in 2009.

Dolores Conchita Figueroa del Rivero alias Chita Rivera was born on January 23rd, in 1933. She was born in Washington, D.C. She was the daughter of Pedro del Rivero and Katherine. Her mother worked as a government clerk whereas her father saxophonist for the U.S. Navy Band. Sadly, Rivera’s father passed away when she was aged seven.

Chita Rivera joined Jones-Haywood School of Ballet in 1944. Later, she joined School of American Ballet under a scholarship.

In 1952, Chita Rivera auditioned for Call me Madam film that was to be starred by Elaine Stritch. However, she did not make it feature in the movie. Nonetheless, this opened her early career on Broadway. Initially, she landed in roles to star as a principal dancer.

Chita Rivera continued honing her talents during the 1950s. She featured in the Broadway show dubbed Seventh Heaven in 1955. Sadly, this show came to an end after a short period. In 1956, she played a part in Mr. Wonderful, a play starred by Sammy Davis Jr.

Rivera’s role in West Side Story brought her to the limelight. During the 1960s, she again became a household name after featuring in Bye Bye Birdie. This was a musical comedy that she played alongside Dick Van Dyke. Due to her exceptional performance, she became a Tony Award nominee.

In 1957, Chita Rivera tied the knot with Tony Mordente. Mordente had acted with Rivera in West Side Story. Together, the couple was blessed with one daughter. Nevertheless, this relationship did not last as they divorced in 1966.