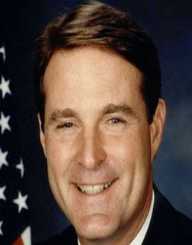 Evan Bayh is a US politician from Indiana who also served as the state's governor from 1989 to 1997. He is a part of the democratic party and had plans to run for the presidential seat 2006 but dropped the intention a week after making the announcement. In 2003, he released an autobiography entitled From Father to Son: A Private Life in the Public Eye. He was also the chairman for Democratic Leadership Council from 2001 to 2005 and aided in the establishment of the New Democrat Coalition.

Evan Bayh has twin sons named Birch Evans Bayh IV and Nicholas Harrison Bayh from his marriage to Susan Breshears. Susan not only works as an attorney but also serves on some corporate boards since 1994 and even served as a director at a particular time. The couple wed in 1985.

Born on December 26, 1955, as Birch Evan Bayh III in Shirkieville, Indiana, his father also worked as a civil servant. Before his father, Birch Evans Bayh Jr., worked as a senator, he was a member of the state of Indiana's legislature and a hog farmer. He relocated in Washington when he won a seat at the Senate in 1962 where the young Birch spent his childhood.

Bayh attended St. Albans School in Washington where he graduated with honors. He also attended the Indiana University of Kelley School of Business with excellent marks on business economics and public policy. He attained his doctoral degree in 1981 from the University of Virginia School of Law.

Evan Bayh officially entered the world of politics when he was elected as Indiana's secretary of state in 1986. From there, he was elected as governor two years later at the age of 33, making him the youngest governor to render service in US history and the first Democrat to serve Indiana in 20 years. One of his right moves as governor was his implementation of a state tax cut amounting to 1.6 billion dollars, the largest in Indiana to date until Mike Pence implemented a more substantial cut a few years later in 2013.

In 1998, Evan Bayh returned to politics when he was elected a position at the US Senate of which his father previously held. Bayh amassed a whopping 64 percent of the vote, recorded as the largest margin for a US Senate Race in Indiana by a Democrat. He was reelected a second time in 2004. At the time of his second term at the office, George W. Bush served as the nation's president. It was also the peak of the war on Iraq of which Bayh supported Bush's authorization of the 2006 Patriot Act, which fully supported the war.

In 2010, Bayh announced that he would not run for a third term at the Senate. In 2016, an attempt was made for the US Senate Election in Indiana, but he was defeated by Todd Young, a Republican, with 52 percent of the vote.