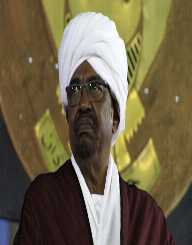 Omar al-Bashir is the president of Sudan born at the beginning of 1944. He entered office in 1989 as the leader of the National Congress Party. He then became the 7th president of Sudan. He participated in both the 1st and 2nd Sudanese Civil War. During this time he rose to the rank of Lieutenant General. He is best remembered for putting much effort in the infrastructure of his country.

He supported the building of the Merowe Dam along with several highways. However, he became president after overthrowing the existing government. He then cleared any obstacles that would prevent him from winning in the 1996 presidential elections.

President Omar al-Bashir was born on January 1st, 1944 to Arab descendants’ family. His place of birth was Hosh Bannaga in Sudan. His father earned a living as a farmer. His family later moved to Khartoum while he was still young.

Omar al-Bashir officially began his career in the military.  He was inducted into the army while he was still quite young. With time he rose through many ranks. During the 1973 Arab-Israeli war, he served as a paratrooper of the Egyptian army. He also became garrison commander of the Sudanese military.

After he took over power, Omar al-Bashir made sure there were no political parties in his country. He then put in place an Islamic legal code. The code was to be observed in the entire country of Sudan. He then assumed many roles in the government. He, for instance, became the Revolutionary Command Council for National Salvation’s chairman after he appointed himself. He also assumed the roles of Prime minister along with those of minister of defense. He appointed himself as chief of the armed forces and chief of state as well.

Omar al-Bashir further prohibited independent newspapers. Many journalists were arrested during this time along with political leaders. Whenever he became suspicious of military leaders plotting a coup, they faced execution. In 1996, he was elected as the president of Sudan. Given his ban on other political parties, he was actually the only presidential candidate during the elections.

Omar al-Bashir maintained his position in 2000 after he won the elections. Meanwhile, the civil war in the country even heightened leading to the loss of millions of lives. The situation was going out of hand. Omar, at last, decided to negotiate with the Sudan People’s Liberation Army or SPLA. In January 2005, he signed a peace agreement the leader of SPLA.

He was charged with crimes against humanity by the International Criminal Court (ICC). The court issued an arrest warrant for him in 2009 and another in 2010.

Omar al-Bashir’s wives are Fatima Khalid and Widad Omer. Fatima is the eldest wife and a cousin of Omar. Omar his second wife has many kids from her previous marriage. However, Omar al-Bashir has no biological children of his own with both his wives.