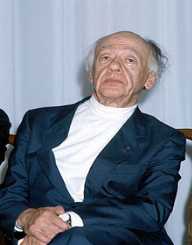 Romanian born, French dramatist, poet, and writer Eugene Ionesco was born in the 26  November 1909 in Slatina, Romania. From a young age, he was raised in France. His father was Romanian, and his mother was of French-Romanian descent. After his parents' divorce in 1925, Ionesco returned to Romania with his father.

At 16 years of age, Ionesco was a pupil at Saint Sava National College in Romania. After high school graduation, in 1928, he enrolled at the  University of Budapest where he obtained a degree in French literature. A Romanian government scholarship enabled Ionesco to do a doctorate, and he relocated to Paris, France in 1938 to do so.

He had his first article published in the Zodiac Review in 1930. His first book of poetry, Elegy of miniscule Beings was released in 1931, followed by a set of essays in 1934. In 1937, he was given a post teaching French at a school in Budapest, and then in 1938, he moved to Paris to do his doctorate. Living in Paris at the outbreak of World War II in 1939, he decided to return to Romania, leaving again in 1942 and settling in Marseilles, France. At the end of the war, he went back to Paris where he worked as a proofreader and also began studying the English language. As he was learning English the stiffness of the grammatical texts inspired him and his play The Bald Soprano (1949) created a new form of drama which gave birth to the Theatre of the Absurd. The Bald Soprano was first staged in 1950. The same year he joined an avant-garde group, the  College of Pataphysics, a group of artists and writers.

After the play premiered in the English language in London, England in 1956, Ionesco’s name as a playwright was established.

The ideas behind the Theatre of the Absurd, of which Ionesco was a pivotal influence, challenged the schools of French drama. Other playwrights working in the same vein include the Irishman Samuel Beckett and Arthur Adamov. Ionesco is considered one of the most important dramatists of the 20th Century.

Awards and acknowledgments Ionesco received include the Tours Festival Prize for Film (1959), the Prix Italia (1963) and the Society of Authors Theatre Prize (1966). In the 1970s Ionesco was awarded the Australian State Prize for European Literature in 1970 and the same year, he was inducted as a member into the Académie française. He also won the Jerusalem Prize in 1973 and in 1976, he was presented with the Max Reinhardt Medal at the 50th Salzburg Festival.

Ionesco married Rodica  Burileanu in 1936, and they had a daughter, Marie-Frances b. 1942. His daughter later became an actress. Eugène Ionesco died in Paris, France on 28 March 1994 at 84 years of age.