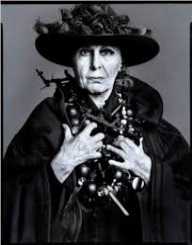 Louise Nevelson was a Russian International artist known for her monochromatic sculptures. She later moved to the U.S. One of her major work include Clown tightrope walker.

Louise Nevelson was born as Leah Berliawsky in Perislav, Russia, on 23rd September 1899. Her father Isaac Berliawsky was a successful businessman, and her mother was Mina Sadie. After the death of her mother, her father moved to the U.S. in a search for greener pastures for his family. For six months, his elder brother took charge of the family.

Her father's absence affected Louise significantly. Isaac later found a good landing place for his father, and in 1905, the whole family moved to the U.S. At first, they struggled financially, but Isaac's real estate business did well. Her family's stand out views on women's rights isolated them from the rest of the society.

Louise Nevelson's dream from an early age was to be an artist. She was however desperate to move away from the small town her family lived to realize her dreams. Her first encounter of art was in Rockland Public Library at the age of nine. This experience motivated her to do art in high school.

After a few years of high school in his hometown, she felt unhappy, and she set sight on moving to a high school in New York to study art. After graduating from high school in 1918, Nevelson moved from her family home to be independent. Her first job was in a law office as a stenographer.

After getting married, she began to study painting, singing, acting and drawing.

Louise Nevelson moved to Germany in 1932 in a quest to further her artistic career. She studied with Hans Hofmann; the school was later closed by the Nazis. Together with Hofmann, she moved back to the U.S. where she settled in New York. Life was hard for her, and she began selling some of her work to survive.

She continued with her artwork through to 1940s. She often struggled to maintain her extravagant lifestyle. Her breakthrough, however, came in the 1950s. Some of her work was featured in the Museum Modern Art world. Her exhibitions were visible across the U.S. in the 70s.

She made The Louise Nevelson Plaza in 1979. It was to become her most reputed work in New York. Her last piece of work came in 1988 at the National Institute of Health in Bethesda.

Louise Nevelson met Bernard Nevelson through his brother Charles; the two were business associates. Louise and Bernard fell in love and later married in 1920. Bernard was a wealthy businessman. Nevelson and her husband moved to New York after their marriage.

She gave birth to her first child, Myron in 1922. After that, Nevelson studied art despite her in-laws' disapproval. Her husband wanted her to be a socialite wife, a lifestyle Nevelson disapproved. After several disagreements in various opinions, the two separated and later divorced in 1941.

On 17th April 1988, Louise Nevelson was pronounced dead. Natural causes being the cause of her death.