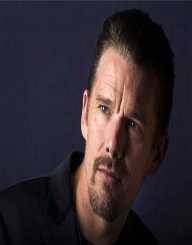 I once told you that you would never credit that you are one and all in this world. I am trying to imply that there is probably a twin brother or sister somewhere that looks perfectly like you. An example of such is Ethan Hawke and Mark McGrath. Both have accepted their similarities to the point where Ethan signs Mark’s autograph and vice versa. Ethan Hawke is famously known as a screen actor, but in reality, he is a prominent novelist. He brought out his stirring honesty on his first novel titled as The Hottest State. Further, Ethan is an accomplished director and stage actor.

On November 6, 1970, Ethan Hawke was born in Austin, Texas, the United States to an insurance actuary; James Hawke and a charity worker Leslie Carole. At three years old, his parents separated, and after a long duration of traveling, he settled with his mother in New York. Ethan enrolled at West Windsor-Plainsboro High School South. In 1988 he graduated from Hun Secondary School of Princeton. Ethan marked his stage debut at 13 years old where he appeared in countable school productions. His acting career began at Hun School where he joined the McCarter Theatre. He later went to pursue her career at Carnegie Melon University in Pittsburgh. He then dropped out where he landed a role in Dead Poets Society.

With a never give up soul, Ethan continued with his thirst for acting. He fathomed in 1985 where he starred in Joe Dante’s Explorers film. After four years of sweat and search, he appeared in Dead Poets’ Society where he later commenced with his off-Broadway debut named as Casanova in 1991. In the mid of the same year, Hawke co-founded his theater titled as Malaparte. After taking different roles in numerous productions, Hawke turned into a global star. Not to mention he rose up as an acclaimed actor, director, and seasoned scriptwriter.

In 1994 Hawke was brought back into the limelight again; thanks to the Generation X film ‘Reality Bites.' After a year, he was acclaimed for his start role in Before Sunrise that depicted a France woman and American woman who explored the Vienna together. In 1996 Hawke published his first novel The Hottest State and followed it up with Ash Wednesday in 2002.

In 1997 Hawke was seen in science fiction film Gattaca and The Newton Boys in 1998.Before he appeared in Training Day in 2001, Ethan took roles in Hamlet and Snow Falling in Cedars. The Training Day film received an Oscar nomination for being the Best Supporting Actor.

In 2000, Hawke took a break from acting and rooted his directive role. He has directed films such as Chelsea walls in 2002 and TV episodes. He later restored back his acting fame in 2004 where he played Taking Lives and Before Sunset. The films garnered him with a screenwriting Oscar nomination. He proved his progress nature by playing a crime thriller Lord of War and Assault on Precinct 13.

In 2006 Ethan was seen in supporting roles such as Fast Food Nation. He also directed ‘The Hottest State’ movie based on his writing in 1996.He later produced his first film titled us Before the Devil Knows You were Dead in 2007. He followed it up with What Doesn’t Kill You and Staten Island in 2009. In 2010 Hawke took his final role when he appeared in Day Breakers. Two of his latest films include the Sinister in 2012 and The Purge in 2013.

In 1998 Ethan Hawke married Uma Thurman, an actress but they then parted ways in 2005. The couple has two children Levon and Maya. In 2008 he wedded Ryan, and they were blessed with two daughters: Indiana and Clementine. Before filming his first novel Ethan personal business office was destroyed by a fire. His post-production studio and fourth-floor office was destroyed. Luckily his negatives and master tapes were secured.