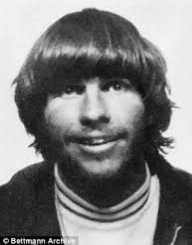 Charles Watson was born on December 2nd, in 1945. He is commonly called Tex Watson. He is infamous because of his association with the Manson Family cult. This group was headed by Charles Manson. Watson was sent to prison after killing Sharon Tate, a renowned actress then. He was aided by Charles and other members of the family in killing the celebrity.

Charles Denton Watson alias Tex Watson was born on December 2nd, in 1945. His place of birth was in Farmersville, Texas. He was raised in Copeville. Watson was the last born son in a family of three. He was brought up by a religious family and that he regularly attended Copeville Methodist Church. While in school, he was an avid athlete. After completing his high school education, he joined the University of North Texas.


Association with the Mansons

One day as Tex Watson carried out his regular duties, he picked up Dennis Wilson, a musician from the Beach Boys group. Later, Wilson invited him to join him and his friends at his apartment. Here, Watson met with other members of the Manson family who lived together in the mansion. He also crossed paths with Charles Manson during this visit.

After a few years of knowing each other, Watson grew closer to Charles and became his right-hand man. At some point, Charles sent Watson alongside other three girls from the family to 10050 Cielo Drive where they were supposed to kill everyone alive in the house. Consequently, they murdered Sharon Tate who was pregnant at the time. Other four of Tate’s friends were also killed during the incident.

The following day, Charles sent Watson on another mission to murder Rosemary LaBianca and Leno. Watson was aided by Patricia Krenwinkel and Leslie Van Houten. Besides this, Watson was also responsible for the murder of Donald Shea, a ranch hand man.

Sooner or later, Tex Watson fled to Texas in October 1969. However, the police caught up with him in November the same year. He was arrested and sentenced to death. In 1972, a ban on death sentencing helped him evade death as his sentence was reduced to life imprisonment.

While in prison, Tex Watson turned over a new leaf and became a saved Christian. He has four children from the marriages that he has been through.