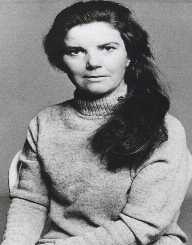 English author Joan Aiken was born in Rye, East Sussex in England on the 4 September 1924. She had two siblings Joan Aiken (1913-1990), and Jane Aiken Hodge (1917-2009) and both were also writers. Her American father was the poet Conrad Aiken and her mother a Canadian, Jessie MacDonald. Aiken’s parents divorced when she was five years old.

She was homeschooled by her mother until the age of twelve then sent to the Wychwood School for Girls in Oxford, England.

Joan Aiken became interested in writing at a young age. As well as having a father for a poet, her mother later married the English novelist Martin Armstrong. After graduating from high school, she worked at the BBC, as a librarian at the UN Information Centre in London and in 1955, after the death of her first husband, she was employed as a features editor with Argosy Magazine. She also worked as a copywriter at the advertising agency, J Walter Thompson.

Joan had a short story collection published in 1953, All You’ve Ever Wanted, and this was followed by More Than You Bargained For in 1955.  In 1960, her first children’s novel The Kingdom of the Cave was published.

In 1962 The Wolves of Willoughby Chase a children’s novel set in 19th century England was published. This turned out to be the first in the James III series which included Blackhearts in Battersea (1964), The Whispering Mountain (1968) and Midwinter Nightingale (2003). The story concerns two cousins who lose their ancestral home to their conniving guardian Miss Slighcarp. The Wolves of Willoughby Chase won the Lewis Carroll Shelf Award in 1965 and made into a film in the 1980s.

Joan also wrote nonfiction including How To Write for Children (1982) and with her siblings, a tribute to their father entitled Conrad Aiken Remembered (1989).

The Wolves of Willoughby Chase (1962)  won the Louis Carroll Prize. She also won the Guardian Children’s Fiction Prize in 1969 for The Whispering Mountain and the 1972 American Edgar Allan Poe award.  In 1999 she was presented with an MBE for her services to literature.

Joan Aiken married Ronald Brown in 1945, and they were married until his death in 1955. She married the American painter Julius Goldstein in 1976 and was widowed for the second time in 2001.

Joan Aiken wrote for both adults and young readers and published over a hundred books becoming one of the twentieth century’s classic authors.