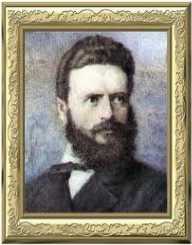 Bulgarian poet Hristo Botev was born on the 6 January 1848 in Kalofer, Bulgaria to
Botyo Petkov and Ivanka Boteva. He was one of eight children.

Hristo Botev was educated at a gymnasium in Odessa Russia (1863-1865). It was around this time that he was exposed to revolutionaries from the Polish Uprising of 1863. At the time, Bulgaria had been ruled by the Ottoman Empire for over five hundred years, and the Polish rebels inspired him.

Hristo Botev returned to Bulgaria in January 1867 but shortly afterward due to pressure from the Turkish authorities he was forced to flee the country. He then moved to Romania where he got heavily involved in the Bulgarian revolutionary movement. He started publishing a newspaper aimed at the Bulgarian expatriate community in 1871. Botev is also engaged in organizing papers and other literature promoting Bulgarian freedom and independence. In 1974, these activities led to Botev becoming a member of the Revolutionary Central Committee. At this stage, he was aware of Marxism and opposed to continued Turkish rule in Bulgaria. His ideas were Utopian socialist, and he spoke out against the role of the church in the status quo in Bulgaria.

Hristo Botev saw a revolution as the only way to achieve his means and formed the Bulgarian Revolutionary Movement in 1875. There was an uprising in Bulgaria in 1876 which became known as the April Uprising. He organized and was part of a group of insurgents who went to Bulgaria to fight but died in battle on Vol Mountain on the 2 June 1876.

Hristo Botev is a national hero in Bulgaria on the day of his death marked as a day of national mourning.

Botev wrote twenty-six poems and is considered Bulgaria’s first modern poet, as well as their most significant.

Hristo Botev was married to fellow Bulgarian Veliko Tarnovo. His widow lived on until the 27 February 1919.

Botevgrad in Bulgaria is named in his honor. So are some schools and sports grounds in Bulgaria. Annually on the 2 June at noon, air raid sirens sound across Bulgaria in remembrance of Hristo Botev.