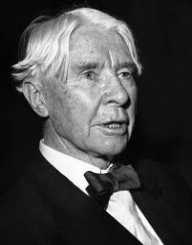 Carl Sandburg was born on the 6 January 1878 in Galesburg, Illinois. His parents August Sandburg and Clara Anderson had immigrated individually from Sweden, met in the US and married. The couple had seven children and were of modest means.

After leaving high school without graduating, Carl Sandburg did non-skilled jobs for a few years; he also traveled around the country on his father’s railroad pass finding what work he could. Then in 1898, he volunteered for the military when the Spanish-American War broke out. He spent some months with the US military in Puerto Rico before returning home. Because of his war service, he was able to enroll in Lombard College in Galesburg without a high school diploma.

The following year, in 1899, Carl Sandburg sat the entrance exams for West Point but failed grammar and mathematics. Instead of going to West Point, he stayed on at Lombard College and pursued his interest in literature. He was editor of the college journal and met his mentor Professor Philip Green Wright who encouraged him to publish his poetry.

In 1902 Carl Sandburg left Lombard College without being awarded a degree. He continued working on his poetry and wrote articles for the Galesburg Evening Mail. That same year his first poem was published in The Thistle. In 1904, Green Wright published a Reckless Ecstasy. At the same time, Carl Sandburg was getting involved with politics as a member of the Social Democratic Party of Wisconsin. He met his future wife through his involvement in politics, and they married in 1908. By 1913 Carl Sandburg was writing for some newspapers and magazines and also doing some editing. In 1914, his poems were published in Poetry: A Magazine of Verse. In 1917, the Chicago Daily News employed him as a reporter. The Newspaper Enterprise Association then employed him to travel to Scandinavia in 1918 to report on the WW I.

In 1919 Carl Sandburg re-joined the Chicago Daily News. Cornhuskers was published, a collection of 103 poems and won Sandburg his first Pulitzer Prize in Poetry in 1919.

During the 1920s Carl Sandburg continued publishing poetry: Smoke and Steel (1920) and Slabs of the Sunburnt West (1922) came out. He also wrote a series of stories for children Rootabaga Stories (1923) and in a biography of Abraham Lincoln: The Prairie Years (1926). The Lincoln biography was met with wide acclaim. He also published The American Songbag (1927) and recorded an album of folk songs. In 1929 he published a biography of Edward Steichen. Good Morning, America and Abe Lincoln Grow up were also published.

In the early 1930s, he gave up working in journalism to concentrate on writing and

worked on the remaining volumns of the Lincoln biography, children’s stories and his poetry: The People, Yes (1936) and Abraham Lincoln: The War Years (1939).

In 1940 Carl Sandburg won the Pulitzer Prize for the Abraham Lincoln: The War Years. He started receiving honorary degrees from some colleges and universities including Yale University and Harvard University. He was also elected to the American Academy of Arts.

During the war years, Carl Sandburg worked for the Office of War Information and also wrote a syndicated weekly news column covering wartime events. Home Front Memo came out in 1943. His brother-in-law had an exhibition at the Museum of Modern Art in New York City, and Carl Sandburg wrote all the captions. Sandburg’s first and only novel, Remembrance Rock, was published in 1948.

In the 1950s, Complete Poems (1950) won the Pulitzer Prize for poetry; his autobiography came out in 1953, Always the Young Strangers was published. Apart from writing, he began traveling around the US giving poetry readings as well as lecturing. In 1954 Abraham Lincoln: The Prairie Years and The War Years came out.

Over the course of his long career, Carl Sandburg won many awards and accolades. In 1946 his childhood home in Galesburg, Illinois declared a memorial. In 1951 he won the Pulitzer Prize for poetry for his Complete Poems (1950). The American Academy of Arts and Letters presented him with a gold medal for history in 1952. His autobiography, Always the Young Strangers (1953) won him a gold medal from the Poetry Society of America. A school in Harvard, Illinois was named after him in 1956.

In 1908 Carl Sandburg married Lilian Steichen, a young woman he had met through his political activities. She as the sister of artist Edward Steichen.

In June 1911, the Sandburg’s first child, a daughter Margaret was born. In 1913 another child was conceived, a daughter Madeline who died at birth in November that year. A third daughter Janet was born in 1916, followed by Helga in 1918.

In 1945 the family moved to Flat Rock. Later years were spent on a farm Connemara in North Carolina. In 1959 Carl Sandburg delivered the Lincoln Day address before a joint session of Congress on the 12 February.

The same year he, as a cultural envoy of the US State Department, he was sent to Russia to represent the US at The Family of Man exhibition in Russian. He also went to his parent's homeland of Sweden and was presented with the Litteris et Artibus medal by King Gustav.

Carl Sandburg died on the 22 July 1967 in his ninetieth year. After his death, his widow donated Connemara, and today the property at 81 Carl Sandburg Lane, near Flat Rock in North Carolina is a national historic site.