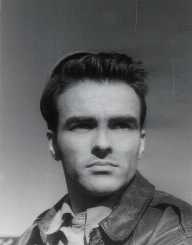 Edward Montgomery Clift was born on October 17, 1920, in Omaha, Nebraska. His father William was the vice-president of Omaha National Trust Company. Clift also had a twin sister Ethel and a brother William Brooks Jr. His mother Sunny was an adopted child, but at 18 was told that her real parents were of prominent Yankee families. She spent the rest of her life trying to prove the alleged relations and was determined that her children be brought up in a style of true aristocrats.

His mother’s determination meant that the children were privately tutored and traveled extensively through America and Europe. They were fluent in German and French. When the Wall Street Crash of 1929 and the Great Depression ruined the family’s financial status, they were forced to move to New York. As his father’s finances improved, Sunny was able to enroll Ethel at Bryn Mawr College, and Brooks at Harvard. However, Montgomery was never sent to college, since he could not adjust to school. Instead, in 1935, he began stage acting which eventually led him to Broadway.

After the beginning of his stage career, Montgomery Clift built a successful career over the next ten years. He appeared in several plays, and 1939 was cast on the Noel Coward’s Hay Fever. The production was aired on TV at the New York World’s Fair as a part of the introduction of television. His first appearance on Broadway was as Prince Peter in the musical Jubilee at the Imperial Theater. He was then only 15 years old. Five years later, Clift played the son in the production of There Shall Be No Night, a play that won the 1941 Pulitzer Prize.

When Clift was 25 years old, he moved to Hollywood. His big screen debut was in the 1948 film Red River. His next project was The Search. Clift was not satisfied with the quality of the script and edited it himself. The movie was awarded the Academy Award for screenwriting, and Clift was nominated for Best Actor. His next film was in 1949, titled The Heiress. Before the release of the film, Clift was marked as sex symbol by the studio. He had a large female following, which led to his co-star Olivia De Havilland being flooded with angry fan letters since her character rejects Clifts in the final scene of the movie.

Montgomery Clift was very picky about his projects, and his fellow actors often said that he could’ve been the biggest star in the world if he would take more projects. One of his most famous movies was A Place in the Sun. He was nominated for the Academy Award for Best Actor for his performance. The film received wide critical acclaim, and its popularity grew even more due to rumors that he was dating his co-star Elizabeth Taylor.

After this project, Clift took a two-year hiatus, but in 1951, starred in I Confess, Terminal Station and From Here to Eternity. The latter earned him his third Academy Award nomination. On the evening of May 12, 1956, Clift was involved in a serious car accident, when he fell asleep while driving and crashed into a telephone pole. He suffered from a broken nose and jaw, fractured sinus and facial lacerations. Clift recovered from the crash in two months and could continue his work on the film Raintree County. Although for the time the plastic surgery achievements on his face were remarkable, in the movie there was a noticeable difference in his face. The left side of his face was immobile, and constant pain led him to alcohol and drug abuse.

After his accident, Clift starred in several projects, including The Young Lions, Lonelyhearts and Suddenly, Last Summer. In 1961, Clift starred in The Misfits, which was the last film for Marilyn Monroe and Clark Gable. Monroe described Clift at the time, as the only person she knew who was in worse shape than she.

In 1961, Clift was nominated for Academy Award for his work in the Judgement at Nuremberg. In 1962, he was filming Freud: The Secret Passion, but his constant drug and alcohol abuse led the Universal studio to sue him for his frequent absences which caused the film to go over budget. Although the case was settled, his reputation was damaged, and Clift could not find a job for the next four years.

Since he was not able to star in feature films, Clift began voice work. He participated in radio broadcasts and was cast in the Eugene O’Neil’s Ah, Wilderness! for The Theatre Guild on the Air. In 1964, he recorded for Caedmon Records The Glass Menagerie and the following year voiced William Faulkner’s writing in the TV documentary William Faulkner’s Mississippi. Thanks to Elizabeth Taylor’s efforts on his behalf, Clift was signed to star in Reflections in a Golden Eye in 1966.

Montgomery Clift had a long-standing friendship with Elizabeth Taylor. She later confirmed that Clift was bisexual. He had many relationships with both men and women. After his car accident and his drug addiction, sex became less important in his life. He was in relationships with William LeMassena, Libby Holman, and Ann Lincoln.

Clift spent most of the time of summer 1966 in his bedroom in New York City townhouse. His body was found by his nurse Lorenzo James on July 22, 1966. The autopsy revealed that he had died of a heart attack, brought on by occlusive coronary artery disease, at the age of 45. Clift had suffered from effects of dysentery and chronic colitis, as well as underactive thyroid. The latter was diagnosed during the autopsy, and it was speculated that the thyroid condition made him appear drunk, even when he was sober. He was replaced in the Reflections in a Golden Eye by Marlon Brando. Clift was honored with a star on the Hollywood Walk of Fame.