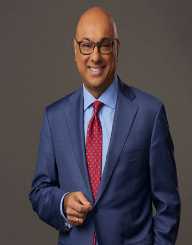 Ali Velshi is an iconic Television journalist of Canadian Nationality. He is famous for his on the spot reporting of fatal incidents of enormous magnitude. His on the spot reporting from The Marriott Hotel (now destroyed), Islamabad, Pakistan, just after the assassination of Pakistan’s eminent political leader Benazir Bhutto in 2008, his coverage of hurricane Gustav, Katrina, the evacuation of an Oil Rig in the Gulf of Mexico and then from damaged oil facilities of Eastern Texas and South Louisiana made him an household name in international television anchoring and journalism. He has also earned a big name in conducting television programmes involving business, finance, and economics.

Ali Velshi was born on October 29, 1969, in Nairobi, Kenya. His father Murad Velshi is an Ismaili Muslim of Gujrati Indian origin and was the first Canadian of Indian Origin elected to the Legislative Assembly of Ontario. His mother’s name is Mila.

Though born in Nairobi, Kenya, Ali Velshi was brought up in Toronto, Ontario, Canada. He received his primary education from Northern Secondary School, Toronto. During his student life, he was also chosen as the school president. He completed his graduation in religious studies from Queen’s University in Kingston, Ontario in 1994. He participated in the protests against Preston Manning and Canada’s Reform Party and was one of the main organizers too while studying in Queens. He was awarded the Queen’s University Alumni Achievement Award in 2010. In 2016, he got an Honorary Doctorate of Laws awarded to him by his Alma Mater.

Ali Velshi started his professional reporting career as a General Assignment Reporter for CFTO channel in Toronto. Afterward, he worked for CablePlus 24 and its then sister station CityTV as a business reporter and anchor. In 1999, he joined Canada’s first all-business news specialty channel ‘Report on Business Television’, later renamed as BNN - Business News Network. In this channel, he started hosting Canada’s first prime time business News Hour ‘The Business News’. In September 2001 Velshi joined the business news channel CNNfn in New York City. He worked for this channel until it closed down in December 2004. He anchored several important and popular business shows including the likes of Insights, Business Unusual, Street Sweep, Your Money etc. He also co-hosted a show called ‘The Money Gang’ with Pat Kiernan before the closure of the channel.

In 2005, Velshi started working for the main CNN Network. During this time, his early morning program ‘The Daybreak’ became quite popular. Next, he hosted 13-hour-long episodes of a reality television show ‘The Turnaround’. He was required to travel across America as a part of the show where he introduced small business owners who were facing challenges of survival and hunting for opportunities to grow their business to high profile mentors providing the required plan to help support the development.

Velshi became a part of the newly launched show ‘The Situation Room’ from 2005 to 2006. He joined ‘American Morning’ in late 2006 as a business correspondent. In 2008, he embarked on the cross-country road-trip abroad named ‘CNN Election Express’. It was a road journey taken from Myrtle Beach, South Carolina to Los Angeles, California intended to interact and discuss monetary issues with the American people met during the long journey. He spent another 10 days riding the CNN Election Express through rural Texas before the state’s March 4, 2008 primaries. While hosting CNN’s ‘Energy Hunt’, Velshi had to go to the places like ‘Arctic National Wildlife Refuge’ and to ‘Oil Sands of Canada’.

His name and fame started spreading like a wildfire when, at the beginning of 2008, he reported the assassination of Benazir Bhutto from the now devastated Marriott Hotel of Islamabad, Pakistan. In 2005 also he showed the same courage and valour during on the spot reporting of Hurricane Katrina. He again covered the Hurricane Gustav, appearing on-air day and night from the hurricane-stricken areas of America.

There was a huge financial crisis in 2008. America was one of the worst affected countries. Velshi appeared on Television frequently throughout the day on shows like ‘American Morning’ and ‘Anderson Cooper 360°’. There were viewers’ live call shows where he appeared suggesting remedial measures to counter the financial crisis, like special editions of ‘Your Money’ and his weekly call-in radio show. During the financial crisis, he also appeared in ‘The Oprah Winfrey Show’ besides being a regular in his own shows.

On October 29, 2012, Velshi was seen reporting Hurricane Sandy standing right in the middle of a flooded street in Atlanta ignoring the fierce winds lashing him and advising the viewers not to venture out of the safety of their homes under any circumstances. In 2013, he joined the newly launched television channel ‘Al Jazeera America’ and started anchoring the show ‘Real Money with Ali Velshi’.

Velshi often writes columns for different magazines such as ‘Money Magazine’ and ‘Delta Sky’. He has also authored several books.

It is rumored that Ali Velshi had first married during his 20s. However, details of this marriage is unknown. They got separated later. In 2009, he married his second wife, Lori Wachs. She is the president of Philadelphia-based Cross Ledge Investments. The two met during one of Velshi’s show.

Ali published his first book in 2009 named ‘Gimme My Money Back: Your Guide to Beating the Financial Crisis’. His second book co-authored by one of his co-host Christine Romans appeared in the market in 2011. It was titled ‘How to Speak Money: The Language & Knowledge You Need Now’.