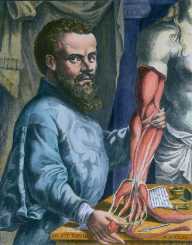 Andreas Vesalius was a sixteenth-century physician, anatomist, and writer he worked as the personal physician of Charles Habsburg, Charles V of the Holy Roman Empire and Charles I of Spain.

Vesalius was born on 31 December 1514 in Brussels, which at the time was part of the Habsburg Netherlands part of the wider Habsburg Empire which stretched from Hungary to Spain and included several colonies in the New World. Vesalius was named Andries van Wesel when he was born. His parents were Anders van Wesel and Isabel Crabbe. Vesalius’ family had a strong medical condition. His great-grandfather had taught medicine at the University of Leuven, and his grandfather was a physician to the Holy Roman Emperor Maximillian I, his father worked as an apothecary to the Emperor. Vesalius studied at the University of Leuven to follow in the family tradition.

The University of Padua then offered Vesalius a lecturing position. He also lectured in other cities in Italy. While in Italy Vesalius aided the founder of the Jesuit Order, Ignatius of Loyola, in his work helping lepers. Vesalius teaching style was much more practically orientated than previously had been the case. Vesalius would use dissection as his primary teaching method and encouraged his students to perform dissections. Previously students would study the works of Galen and watch a barber perform a dissection while the lecturer talked over the procedure. Vesalius also published some diagrams and illustrations on anatomy. It was Vesalius who was the first prominent physician to point out that Galen had used Barbary Apes instead of human subjects for his dissections.

Vesalius then set to work updating Galen’s work. Vesalius highlighted discrepancies in Galen’s work which had been held as true for over a millennium such as, the jaw bone was made of one, and holes do not connect the ventricles of the heart. Vesalius moved to Basel in Switzerland and worked with Johannes Oporinus on the seven-volume, On the fabric of the human body. This book and the abridged version written for students by Vesalius have been combined into the Fabrica of Vesalius. The Fabrica of Vesalius is seen by the start of the modern study of anatomy. Vesalius then gave up his professorship at the University of Padua and turned down the offer to take over at the University of Pisa. Instead, he joined the court of Charles Habsburg, King of Spain, Holy Roman Emperor, King of Naples and Duke of Burgundy.

Vesalius was continually under attack from other members of the court for his dissections. He was investigated by religious boards but was acquitted. Despite the attacks, he continued to write. Supporters of Galen’s work often attacked his writings. Charles Habsburg abdicated in 1556 and handed his Spanish and Italian possessions to his son Phillip II, and his German holdings were given to his brother Ferdinand. Vesalius continued to work for Charles’ son Phillip II. He was given a lifetime pension and made a count palatine. In 1564, Vesalius set off for the Holy Land on a pilgrimage. He sailed with the Venetian fleet to the Holy Land. While there he was offered his old position at the University of Padua.

However, on the return journey, Vesalius was shipwrecked on the Greek island of Zakynthos and died on 15 October 1564 and was buried on the Island of Corfu by some Venetians. Vesalius contributed to the advancement of anatomy with his numerous writings and his challenging of Galen’s works. He also headed a public health scheme in Venice to prevent outbreaks of plague in the city. He did this at a time when Galen held an almost religious following in medicine and dissection was closely monitored by the Catholic Church.