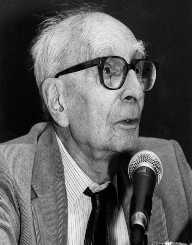 Claude Lévi-Strauss was born on 28 November 1908, in Brussels, Belgium. His father, Raymond Lévi-Strauss was a portrait painter and mother Emma was a homemaker. They were French people with the Jewish faith. His parents moved to Paris during his childhood.

Claude attended two schools ‘Lycée Janson de Sailly’ and ‘Lycée Condorcet’ during his formative years. After completion of his school education, he joined the Sorbonne University of Paris, one of the best universities in contemporary France. He started studying Law and Philosophy at the Sorbonne. He did not continue his study of Law and completed his graduation in Philosophy in 1932.

Claude Lévi-Strauss worked as a secondary school teacher in Paris for a few years after his graduation. In 1935, he accepted the offer of becoming a member of French Cultural Mission to Brazil as a visiting professor of Sociology at the University of Sao Paulo at the eleventh hour. At that time, his wife Dina was also a member of the mission and was serving as the visiting professor of Ethnology. From 1935 to 1939, the couple stayed in Brazil, working in their respective capacities as well as conducting anthropological and ethnographic research work.

Claude accompanied his well-qualified ethnographer wife on several expeditions to Mato Grosso and Amazon Rainforest region of Brazil and neighbouring countries. There, they analyzed the life of local tribes, Guaycuru and Bororó Indian. They stayed with them for a few days to study their lifestyle and culture.

A second expedition on the same lines and purpose materialized in 1938. This time the duration of the expedition was longer, and it took almost six months to unwind this expedition after researching different tribe groups of Nambikwara and Tupi-Kawahib societies. Unfortunately, Claude’s wife suffered an eye infection during the expedition and was unable to complete her study. Claude himself concluded the research single-handedly. His reputation as a leading anthropologist enhanced manifold after the conclusion of the second expedition.

Claude Lévi-Strauss returned to France in 1939. He joined the French Army during World War II and was stationed as a liaison agent at the Maginot line. After the invasion of France, he had to flee the country to survive the Jewish oppression by the Nazis. He was already stripped of his French Citizenship under the Vichy Racial Laws and was separated from his first wife, who stayed back and worked for French Resistance.

After a long, uncertain and arduous journey, Claude finally reached the New York City. In 1941, he was offered a position of visiting professor at the New School for Social Research in New York City. His asylum in the United States was also legally granted. He pursued his career at the New School for Social Research for the next four years. Upon completion of the World War II, he stayed back in the United States and was briefly appointed cultural attaché to the French Embassy in Washington DC.

In 1948, Claude Lévi-Strauss returned to Paris. He submitted two doctoral theses, a minor and a major, at the Sorbonne University. ‘The Family and Social Life of the Nambikwara Indians’ and ‘The Elementary Structures of Kinship’ were the two theses Claude submitted at the Sorbonne and received his doctorate. His second thesis, ‘The Elementary Structures of Kinship’ was published in 1949. It became a vital document on the position of women in non-western cultures. According to the British Anthropologists such as Alfred Reginald Radcliffe-Brown, kinship was dependent on a person's ancestry while Claude argued that it is based on the alliance between two families formed on account of marriage.

Claude Lévi-Strauss continued publication of different theories regarding structuralism and structural anthropology throughout the late 1940s and early 1950s and found considerable professional success. He was made the Director of Studies of the ‘École Pratique des Hautes Études’ in their religious science section. Nearly for the next two decades, Claude continued to work in that section and started working on his first sought after major book ‘Tristes Tropiques.’

In 1959, Claude Lévi-Strauss became the chairman of the Social Anthropology department at the Collège de France. He published his masterpiece work ‘Structural Anthropology’ in the next two years. He compiled all his theories published and propagated so far to form one of his most important works - ‘Mythologiques.’ The concept of the work dealt mostly in anthropology and had up to four volumes. The work was published in 1971.

Claude Lévi-Strauss retired from ‘École Pratique des Hautes Études’ in the year 1974. He spent the rest of his life in research related works.

‘Tristes Tropiques’ and ‘Structural Anthropology’ are his two major works published in 1955 and 1961 respectively. In the first book, Claude Lévi-Strauss narrated his life in the United States during World War II and is regarded by many critics as a literary marvel. The second book is mostly technical and established his supremacy firmly in the subject field.

On 14 May 1973, he was awarded the ‘Academie Francaise,’ the highest academic honour in France, for his four-volume book ‘Mythologiques.’

In the same year, he was given the ‘Erasmus Prize’ by the ‘Praemium Erasmianum Foundation.’ The award was presented in recognition of his contribution towards the social sciences and European Culture.

Claude Lévi-Strauss married his first wife Dina Dreyfus in 1932. They divorced afterwards and never had a child. He married for the second time in the year 1946. Rose-Marie Ullmo was his second wife. The couple was blessed with a son before being eventually divorced. Claude married Monique Roman in 1954. They had a son named Matthieu.

Claude Lévi-Strauss died on 30th October 2009, in Paris at the age of 100. The world will remember him as one of the most accomplished anthropologists. His research led the way towards a paradigm shift in the study of the evolution of culture.