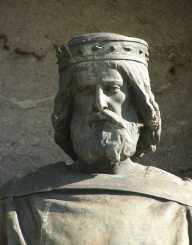 Pepin III, also known as Pippin the Short was the first king of the Franks and played a very vital role in the foundation of the Holy Roman Empire. Although he was one of the powerful and successful rulers of his time, his famous son, Charlemagne, who succeeded him overshadowed him.

Pepin was born in 714. He was the younger son of the Frankish Prince, Charles Martel and his wife, Rotrude. Pepin was brought up by Ecclesiastical education which he received from the monks at St. Denis.

Pepin's father, Charles Martel died in 741. His kingdom was divided between Carlomon, his first son and Pepin's elder brother, and Pepin. Carlomon became the mayor of the Palace of Austrasia, while Pepin assumed the throne as Mayor of the Palace of Neustria. Meanwhile, Charles Martel had another son from his second wife, Swanahilde. The child was named Grifo. When he heard about his half-brothers' assumption of the throne, he revolted and demanded a share of the inheritance. He was however apprehended and imprisoned by them and imprisoned in a monastery.

By that time, the Frankish realm's kingdom was unified due to the connection with the person of the king. To secure this unity, Carlomon raised the Merovingian Childeric to the throne. In a somewhat surprising turn of events, Pepin became the sole mayor of Francia, after his elder brother, Carlomon entered the monastery. Meanwhile, Grifo escaped from prison and fled to the Duke of Bavaria, Odilo, who was married to Pepin's sister, Hiltrude. Grifo again attempted to revolt against the throne but was again quashed by Pepin. Pepin went ahead to restore the boundaries of his kingdom.

Pepin was subject only to the decisions of Childeric III, who was just a ceremonial king, wielding a non-significant power. Pepin thus had control over the magnates and had the power of a king. He suggested to Pope Zachary that the king had no royal powers and was therefore not useful. The pope, being hard pressed by the Lombards agreed with Pepin's assessment and moved to declare the throne vacant, deposing Childeric III as the king. Childeric was sent to the monastery afterwards.

Pepin was subsequently elected king of the Franks by the assembly of Frankish nobles, predominated by his army. Grifo continued to rebel against Pepin and was finally killed in the battle of Saint-Jean Maurienne in 753. Pepin was anointed as king twice. First in 751 and secondly by Pope Stephen II at Basilica Saint Denis, in 754. His second anointing was very colorful and lavish. He was bestowed with another title of Patricius Romanus which translates as Patrician of the Romans, pointing to the role Pepin played in the growth of the Holy Roman Church. He also had his sons, Charles, who was later renamed Charlemagne and Carloman anointed.

Pepin upon assuming the throne sought to expand the territory of his kingdom and recover the lost properties of the church. He forced the Lombard king to return the property of the church which he had seized. He also drove out the Iberian Muslims from today's France. His intervention for the pope against the Lombards in Italy helped secure several cities, which he gave back to the Pope as part of his donation. Altogether, these properties formed the legal basis for the Papal States present in the Middle Ages.

Pepin's expansion wars saw him conquer Septmania, recovering the city from the Islamic Umayyads. He also subjugated the southern realms with his many victories over waifer of Aquitaine and his Basque troops. The Basque and Aquitanians, after so many losses finally pledged loyalty to the Franks. He also expanded the Frankish Church. Though he was a mighty king, he was not as famous as his father or son, Charlemagne.

Pepin III surely left an excellent legacy for many rulers. He very much was a great king.