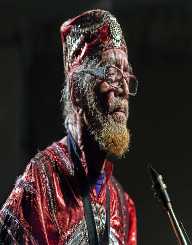 Sun Ra is arguably the most flamboyant Afro-American jazz artist of his generation. His style of composition and cosmic spiritual philosophy made him a bizarre figure.

Sun Ra was born in Birmingham, Alabama on the 22nd of May in the year 1914. At birth, he was named Herman Poole Blount. Ra changed his name severally before sticking to Sun Ra. From Blount, he became Le Sony's Ra, Sonny Blount and stuck to Sun Ra. His mystic nature started from his naming. His mother named him Herman, after a famous stage magician in Birmingham. Ra graduated from Parker High School. He attended the Alabama University, then still an agricultural college.

From an early age, Sun Ra showed a great liking to music. He studied the piano under Fess Whatley in high school. After mastering the piano, he started performing with local musicians. His exceptional skills made him a prodigy of many visiting musicians.

At the age of 31, Sun Ra moved to Chicago. The relocation gave him a wealth of experience. He worked with many of Chicago’s jazz musicians. Chicago was always termed as the capital of Afro-Americans. Ra was exposed to many philosophical debates on black emancipation, the civil rights movement, culture, and history. As a jazz musician, this helped enrich his music. He incorporated all those debates in his music. He became a musician, philosopher, historian, and spiritual leader.

In 1952, he changed his name to Sun Ra while in Chicago. Apart from denouncing his birth name, Ra claimed to have come from planet Saturn. He formed a recording label called Saturn Records. Ra formed a jazz band and called it Arkestra. The name was an adulteration of the word Orchestra. His weird spiritualism showed off in his dressing too. His band, the Arkestra, had outrageous outfits while performing. Ra assumed the high priest role of the band. His regalia were both captivating to outright bizarre.

Sun Ra and his band performed several genres of music. In his performances, he incorporated instruments that seemed alien to traditional jazz. These were tympani, electric piano, and some flutes. The Arkestra also did exotic routines on stage including acrobatics. The Arkestra performed in all invitations. They had concerts from big cities to the base of the pyramids in Egypt.

In 1961, Ra moved to New York. The band lived communally to cost cut on expenditure. Ra was a strict disciplinarian. He would call his band to practice at any time without notice. He strictly prohibited alcohol and sexual relations within his band. Though he had good concerts in New York, the high cost of living led him to move on.

Nine years later, he moved to Philadelphia. His friendliness to the youth of Philadelphia endeared the residents to his band. He had free concerts every Saturdays. Ra and his Arkestra made several tours in the US and world.

In his musical career, Sun Ra managed to record 60 albums with his Arkestra. Many musicians also passed through the band and went ahead to launch their careers. Ra and his band members featured in two films directed in the US.

To preserve his work, the University of Chicago has a collection of his works. At the Regenstein Library, one can find Sun Ra’s musical and personal items on display.

Sun Ra was a very religious person. He studied books on Black Freemasonry, ancient Egyptology and hieroglyphics, and terrestrial beings. Nonetheless, he never ascribed to any religion. He was mysterious from childhood. Unlike most children, Ra always kept to himself. His father left him to the care of his mother, aunt, and grandmother. Most of the times, Ra evaded questions on his private life.

In 1942, during the WW2, he rejected his drafting into the military. The objection on religious grounds was affirmed. Subsequently, he was given an alternative service at the Civilian Public Service camp in Pennsylvania.

He suffered from cryptorchidism. This is a rare condition affecting the testicles in boys. One or both testicles in the scrotum disappear back into the abdomen. In some cases, the situation leads to infertility.

Sun Ra died on May 30, 1993, in Birmingham. Even on his deathbed, he gave his home address as planet Saturn. He was a genius in his compositions. His brand of philosophical music attracted fans and critics in equal measure. Ra used his music to ignite emotive debates in the black community in the US. His supporters equated him to black luminaries like Elijah Muhammad, Marcus Garvey, Bob Marley, and Malcolm X.