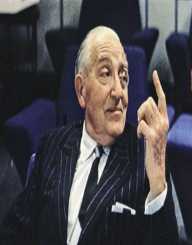 Friedrich Christian Anton “Fritz” Lang was an Austrian born American screenwriter and filmmaker. Born on December 5, 1890, he was known by the British Film Institute as the “Master of Darkness.” He started his career in Germany before moving to the United States. He also occasionally worked as an actor and producer. His notable works include Metropolis, 1927 and M, 1931. Lang directed numerous films throughout his career in Germany and the United States.

Friedrich Christian Anton “Fritz” Lang was born on December 5, 1890, in Vienna as the second child of Anton Lang and Pauline “Paula” Lang. His father was an architect and a construction company manager. He was raised in the Catholic faith. He enrolled at the Technical University of Vienna, where he initially studied civil engineering but switched to art as his interest in the field. Lang left home in 1910 for a worldwide tour, travelling to Europe, Africa, Asia, and the Pacific area. In 1913, he went to Paris, France to study painting.

During the World War I, Fritz Lang left Paris for Vienna for voluntary military service in the Austrian army. He fought in Romania and Russia and was injured three times during the war and lost sight in his right eye. He earned the rank of lieutenant and was discharged from the army in 1918.

After leaving the army, Fritz Lang for a short period launched an acting career in the Viennese theatre circuit. He later switched to writing and directing with his debut movie Halbblut (The Half-Caste), released in 1919. He was hired by producer Erich Pommer at the Berlin-based production company, Decla Biscop studio. For the company he made films like Der müde Tod (Destiny), 1921; Dr. Mabuse, der Spieler - Ein Bild der Zeit (Dr. Mabuse: The Gambler), 1922; Die Nibelungen: Siegfried (Siegfried) 1924; and Die Nibelungen: Kriemhilds Rache (Kriemhild’s Revenge), 1924.

Marriage and later career in Germany

Fritz Lang married writer Thea von Harbou whom he first met in 1920, and the two collaborated on several screenplays. In 1927, he made the futuristic film, Metropolis, considered one of his best masterpieces. In 1931, he directed his debut sound film M, based on a true story. The film became very popular achieving international success and became a landmark of Expressionism in the German film industry.

In 1933, he came out with the crime thriller Das Testament des Dr. Mabuse (1933; The Testament of Dr. Mabuse). Adolf Hitler’s minister of propaganda Joseph Goebbels banned the film because of its anti-Naza sentiment. He later invited Lang for a meeting during which he offered him the post artistic director of UFA. For fear of his life Lang, fled to Paris leaving behind his wife who was already a member of the Nazi Party and his personal belongings. She later divorced Lang. while in France he made the film Liliom, in 1934.

Fritz Lang accepted an offer by David O. Selznick to direct films in Hollywood for the production company Metro-Goldwyn-Mayer, Inc (MGM). His movie for company, Fury, 1936, starring Sylvia Sidney and Spencer Tracy achieved moderate success, resulting in MGM terminating the contact with Lang. His next job was with independent producer Walter Wanger for whom he did films including You Only Live Once (1937), You and Me (1938), and You Only Live Once.

Lang moved to 20th Century-Fox directing films like The Return of Frank James, 1940, Western Union, 1941, Man Hunt, 1941. He left Fox after some disagreement with producer Darryl F. Zanuck. With Bertolt Brecht, he released the independent film, Hangmen Also Die! in 1943. In 1944, he directed The Woman in the Window, starring Edward G. Robinson and Joan Bennett. He followed it with Ministry of Fear, 1944, Scarlet Street, 1945, Cloak and Dagger, 1946 and Secret Beyond the Door in 1947.

Fritz Lang directed the melodrama House by the River in 1950 for Poverty Row studio Republic Pictures and followed it with American Guerrilla in the Philippines (1950), starring Tyrone Power,  Rancho Notorious, 1952, starring Marlene Dietrich and the melodrama Clash by Night, 1952, starring Marilyn Monroe, Barbara Stanwyck, Paul Douglas, and Robert Ryan. Other works include Tiger of Bengal, and The Tomb of Love both released in 1959, and Dr. Mabuse series, Die 1000 Augen des Dr. Mabuse (The Thousand Eyes of Dr. Mabuse), in 1960.

Fritz Lang died in 1976 after suffering a stroke. He was buried in the Forest Lawn Hollywood Hills Cemetery in Los Angeles.

Fritz Lang has a star on the Hollywood Walk of Fame at 1600 Vine Street for his contributions to the motion picture industry.