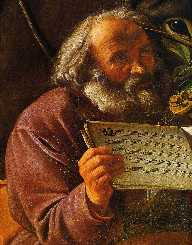 Michelangelo Merisi Caravaggio was an Italian painter whose paintings combined a realist observation of human nature, psychological and emotional aspect with a dramatic use of lighting. He worked with live models and expressed scenes featuring violent struggles, torture, and death. He is known for masterpieces such as 'The Supper at Emmaus and the Death of the Virgin.'

Michelangelo Merisi Caravaggio was a son of Fermo Merixio and Lucia Aratori, born on 29th September 1571 in Milan. His father was a household administrator-decorator to the Marchese of Caravaggio while his mother Lucia came from an affluent family. His family moved to Caravaggio in 1576 to escape a plague outbreak that killed his father and grandfather on the same day in 1577. His mother died in 1584; the same year which he began his training with Milanese painter Simone Peterzano.

After his training under Simone Peterzano, Michelangelo Merisi Caravaggio left for Rome in 1592 where he worked for highly successful Giuseppe Cesari, Pope Clement VΙΙΙ’s favorite artist painting flowers and fruits. At this time, there was a high demand for church paintings in Rome as there were many new and huge churches built and required religious arts to counter the threat of Protestantism.

In the 1590s he made several known works such as a small ‘boy Peeling a Fruit,' a ‘boy with a basket of fruit’ and Young Sick Bacchus. Later, he left Cesari and created some meaningful friendships with architect Onorio Longhi, sixteen-year-old artist Mario Minniti who served as his model and painter Prospero Orsi.

Orsi, in turn, introduced him to influential collectors such as Longhi and Roman Street-brawls. Michelangelo Merisi Caravaggio created his first masterpiece ‘The Fortune Teller’ in 1595, which shows a boy having his palm read by a gypsy girl who cautiously removes his ring as she strokes his hand.

He then made another painting ‘The Cardsharps ‘showing a naïve youth of privilege falling victim of card cheats. This painting attracted the attention of one of the leading specialists in Rome, Cardinal Francesco Maria Del Monte who allowed him to stay in his home, proving art supplies as well as some allowance. By and large, he made other paintings such as 'The Musicians,' 'The Lute Player,' 'tipsy Bacchus' and 'a Boy Bitten by a Lizard.'

Michelangelo Merisi Caravaggio’s first paintings on religious themes include the Penitent Magdalene which showed Mary Magdalene seated on the floor weeping as her jewels scattered around her. Although this picture was understated, he made some other remarkable religious themes such as Saint Catherine, Martha, and Magdalene, Sacrifice of Isaac, Rest on the Flight to Egypt among others.

In 1599, he was contracted to decorate the Contarelli Chapel of San Luigi dei Francesi where he made the Martyrdom of Saint Matthew and Calling of St. Matthew. He manifested realism in these arts which were a turning point in his Italian style of painting.

Each of his new painting increased his popularity although a few were rejected and had to look for new buyers or re-paint. Most appreciated his dramatic intensity but some saw his realism as unacceptably vulgar. For instance, he made his first version of Saint Mathew and the Angel with the saint featured a bald peasant with dirty legs being attended by an over-familiar clad boy-angel. Michelangelo Merisi Caravaggio named his second version 'The Inspiration of Saint Matthew.' Another of his rejected artwork was 'The Conversion of Saint Paul' which he made another version of the subject and named it 'the Conversion on the Way to Damascus' which was accepted.

Other works included Entombment, Madonna di Loreto, The Grooms Madonna and the death of the virgin. The groom’s Madonna was used for only two days but later on removed as it was considered vulgar and disgust by the Cardinal's secretary.

The portrait of 'The Death of the Virgin' was bought in 1601 by a wealthy judge who worshipped with the Santa Maria Della Scalla church, but it got rejected in 1606 by the Carmelites. Any case of rejection of the Caravaggio’s paintings did not mean they were out of favor. His portrait on The Death of the Virgin was purchased by Duke of Mantua after it was taken out of the church and was later acquired by Charles Ι of England before the French Royal collection of 1671.

In years 1606-1610 Michelangelo Merisi Caravaggio made 'The Seven Works of Mercy' which depicts a set of kind acts for those who need material help. This painting has become a church altarpiece of Pio Monte della Misericordia in Naples. After arriving on the island of Malta in 1607, he made a large portrait of Beheading of Saint John the Baptist and a portrait of Alof de Wignacourt and his Page.

In Sicily, he made paintings of the 'Burial of St. Lucy', 'The Raising of Lazarus' and 'Adoration of the Shepherds'. After nine months stay at Sicily, he returned to Naples in 1609. He painted 'The Denial of Saint Peter,' followed by a portrait of 'John the Baptist,' 'the Martyrdom of Saint Ursula,' 'Salome with the Head of John the Baptist' and 'David with the head of Goliath.'

His most significant portrait is of Saint Matthew which portrays Saint in a realistic light with a deviation from the spiritual and religious theme. Remarkably, the portrait succeeds other masterpieces such as 'Death of the Virgin' and 'The Supper at Emmaus.'

Michelangelo Merisi Caravaggio is known for having temper issues and engaged in fights often. In 1606, he killed Ranuccio Tomassoni and escaped his punishment by flying to Rome. Additionally, he traveled through the island of Malta, Naples, and Sicily where he continued with his artworks.

He was imprisoned in 1608 for engaging in a conflict with Fra Giovanni Rodomonte Roero but was released. He is suspected to have killed him after his release as shown in paintings that followed. He died on July 18, 1610, at 38 years a death speculated to have been caused by high content of lead in his body probably from the paints he used.