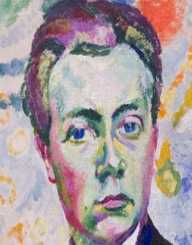 Robert Delaunay is one of the best known French Painters who is famous for his beautiful and unique style of painting which was very new in those times. Robert Delaunay is renowned for his use of vibrant colors and incorporating the same into Cubism which as a trend was later to be recognized as Orphism.

Robert Delaunay is one of the important figures of the 20th century when it comes to paintings. Though his image is often thought to be overshadowed by other contemporaries from the same time like Picasso, Matisse and Barque but his contribution towards arts can never be taken for granted.

Robert Delaunay failed in his final exams and then, showed his will to become a painter to which his uncle complied with and admitted him to Decorative Arts by sending him to Ronsin’s atelier in the year 1902. Following the same, he started following his passion for painting with the full flow by the age of 19.

Robert Delaunay was the among the earliest painters to be categorized as a non-representational painter developing upon the abstract art based on compositional tensions which are followed till now. His career began when he was a theatre designer where he painted only for part-time.

He made his first official confirmation in the year 1910 where he made two different series of paintings by the name of ‘Cathedrals’ and the ‘Eiffel tower’ as his contribution to cubism showing his unique style, i.e., the combination of dynamic movement with the vibrant colors.

His orphic style made an immediate appeal to the viewers coupled with poetic, rhythmic and colorful harmonies as distinguished from the orthodox style. His style was also accepted by his wife later on in her career which also showed an immediate influence on her work.

Robert Delaunay's paintings were put on display throughout the world, and he was successful all around the world. He even participated in the first Blanc Reiter exhibition in Munich and managed to sell four works. This exhibition led him to Erwin Ritter von Busse’s article by the name of ‘Robert Delaunay’s Methods of Compositions’ which were also put on display in the Blaue Reiter Almanac in the year 1912.

The year 1912 was a big year for Robert where his art was not only on full flow but was also one of his most important and major exhibitions which lasted for around two weeks. It also exhibited more than forty-six of the works of Robert Delaunay. This collection was not only appreciated by the critics but the general public at large as well. The exhibition also represented him as an artist has a great vision of the world.

Robert Delaunay was also very proud of his work as at one instance while traveling with Apollinaire to Berlin for an exhibition of the works of Robert at the Galerie Der Sturm, his famous painting which is renowned by the name of La Ville de Paris was rejected for being too big by the Armory Show, he took a serious action. Robert felt insulting and as a result, asked Samuel Halpert for removal of all his works from the very show for times to come.

After the end of World War I, Robert Delaunay returned to Paris in the year 1921, and there Robert continued his unique and abstract style. After that, he even participated in the World Fair held in Paris in the year 1937 showing his numerous and varied designs of railway and air travel pavilions.

But after the eruption of World War II, he moved to Auvergne, and during this time he had cancer, and this shifting did not suit him. As a result of this, his health deteriorated. He thereby died of cancer on 25th of October in the year 1941 at the age of 56.