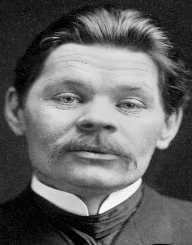 Maxim Gorky was a Russian author who was considered the father of Soviet Revolutionary Literature. He was also known to be the founder of the socialist realism doctrine. He had a difficult childhood and had to roam about the Russian empire changing jobs anyhow for about fifteen years until became very successful as a writer. The experience he had in the fifteen years sojourn of hardship influenced his writings as he was known to have written stories about lives of the tramp and social outcast. His writings are known to be naturalistic. His work, The Mother, was praised by Lenin as a very timely book. It was even one of his greatest works.

Maxim Gorky was a very influential fellow in the political thought at that period and was also active with the emerging Marxist Social-democrat movement. He, however, became a critic when Vladimir Lenin Seized power. He served as an advocate for Soviet as well as the Union of Soviet Writers.

Maxim Gorky was born on 28 March 1868  in Novgorod, Russia. He became an orphan at a very tender age of eleven and was raised by his maternal grandmother. His grandmother helped him so much in the development of his storytelling ability. He, however, ran away from home at age 12 in 1880. He attempted suicide in 1887 after traveling around the Russian Empire for five years changing jobs like clothes. It was where he was working someday that he was introduced to reading with changed his life.

He adopted the pseudonym Maxim Gorky of which Gorky means bitter. He, however, chose that name probably because of his experience in life. He began writing in the 1890s. His first short story was Makar Chudra which was very popular among readers. Maxim Gorky later wrote a short story about a thief and which was later published. He wrote a lot with sympathy about the outcasts, gypsies, the hobos and dreamers in the Rusian Empire Social decay. His perspective about the country is well acclaimed and respected all over the world. He published his collection of writings, Sketches, and Stories in 1898.

Maxim Gorky later produced his full-length books and plays. Sooner, he became friends with Leo Tolstoy and Chekhov whom he penned their memoirs. Sooner, his play, The Lower Depths was praised by Chekhov having published. The play became very successful in the United States and Europe. He was so much devoted to Marxism that he gave much of his income to the cause. Sooner, he followed the Bolshevik wing upon a party split in 1903. He was later imprisoned during the Rusian Revolution in 1905. He went to live in America and Europe upon his release writing The Mother in America. He lived in America and Europe between 1906 and 1913. He, however, returned to Rusia in 1913 where Vladimir Lenin has seized control of the country.

He was so much infuriated about the undemocratic tactics in which the country was taken over. In 1921, he was forced to leave Russia following his criticism of the Bolsheviks. Maxim Gorky had traveled to Europe before he settled in Italy in 1924. He continued writing his works and completed his autobiographical trilogy. He later returned to Russia in 1928 when Joseph Stalin has taken over the Soviet Union upon the death of Lenin.

His major works mostly are praised by Chekhov and even became very successful in Europe and the United States in 1902. The play which was praised is The Lower Depths. Later, Twenty-six Men and a Girl, Summerfolk and Children of the Sun were his well-known works.

Maxim Gorky initially married Moura Budberg as his unofficial wife. Moura was his secretary who was hired in 1921. He, however, died at his villa in Gorki, outside Moscow. He died at the age of 68 after being unwell and undergoing medical treatment. It was around that period a rumor was circulated that Stalin had planned and arraigned for his death. Later on, Stalin made no outward sign of renouncing him. His ashes were placed in the Kremlin Wall. Despite the fact that he was an acclaimed writer, he was persecuted and forced into exile for many years. He lived in Europe, America, and Italy due to political reason.