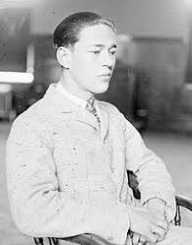 Richard Loeb was a student at the University of Chicago alongside his ally Nathan Freudenthal Leopold famously known for kidnapping and slaying a fourteen-year-old Robert Franks in 1924 in Chicago. He was arrested alongside Leopold and after the trial sentenced to life imprisonment. Their perception of their intellect gave them a notion that their crime will go unnoticed which they thought was a perfectly planned crime.

While serving his jail sentence, Loeb was murdered by a fellow inmate in 1936. However, Leopold was set free in 1958 on parole. The crime which was termed as the ‘crime of the century’ then became a basis by which several films were made including ‘Rope’ by Patrick Hamilton in 1929, ‘Compulsion’ and ‘Swoon.’

Richard Loeb was born Richard Albert Loeb to a wealthy lawyer Albert Henry Loeb and Anna Henrietta. He was born in Chicago, Illinois on June 11, 1905. He was an intelligent son from his childhood in which he skipped various grades in school. He was the youngest student ever to enroll at the University of Michigan at the age of fourteen and graduated at the age of seventeen.

He was involved in crime from an early age inspired by the books he often read like detective novels and articles on offense. He always perceived himself as the master of criminals owing to his early involvement in crimes like shoplifting, arson, and vandalism.

Richard Loeb met Leopold in 1920 at the University of Chicago and became best of friends. Although they were acquainted with each other from childhood, their relationship remained casual. Both Loeb and Leopold had come from wealthy families and grew up in the same neighborhood in Chicago. He became close to Leopold since he had the same interests as his in crime.

Leopold’s favorite was the work of Friedrich Nietzsche's Supermen by which he perceived himself as superior to laws and restrictions. Loeb was also persuaded that he was also superior and soon the pair started indulging in petty crimes including theft and vandalism. Their first crime together was when they broke into a fraternity house at the university and made away with penknives, a camera, and a typewriter.

Later, they began committing serious crimes including arson which went unnoticed. Loeb and Leopold had considered themselves as supermen and wanted to commit a crime which would attract the attention of the public. They planned to execute an offense which they thought would be a perfect crime and will make them famous.

Their project was to kidnap and kill an innocent adolescent which would be their perfect crime. To make their crime even more noticeable, they resorted to making demands on ransom. After a long search for a victim, Loeb and Leopold settled on the son of a wealthy Chicago watch manufacturer Robert Franks. Franks was a fourteen year old student at Harvard School for Boys in the Kenwood and a second cousin to Loeb.

On May 21, 1924, the two executed their plan and kidnapped Franks using a car that Leopold had rented. Loeb struck Franks on the head with a chisel which led to his death and set on to demand ransom from the family on the missing Franks. However, on May 29 the same year, the two were arrested after much investigation and were summoned for questioning.

Richard Loeb and Nathan Leopold arraigned at the Chicago Courthouse Place with Clarence Darrow as the defense lawyer hired by both families to represent their sons. After Clarence’s speech and the court’s hearing the two were sentenced to life imprisonment for the murder plus 99 years for the kidnapping on September 10, 1924. They were sent to Joliet Prison where they remained in custody until Leopold’s transfer to Stateville Penitentiary. Later, Loeb joined Leopold at the Stateville Penitentiary where they served best known as wealthy snobs due to the cash their parents sent them.

On January 28, 1936, Richard Loeb was attacked by his fellow inmate known as James Day and killed him. Day claimed that Loeb had made attempts to assault him and that he acted in self defense. Leopold suffered depression for the loss of his friend and was later released on parole in 1958 after serving for 33 years. Loeb died at the age of thirty.