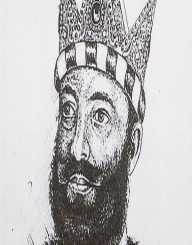 Mahmud-I Zabuli was born on November 2, 971, in the town of Ghazna, Zabulistan, Samanid Empire. His father was Abu Mansur Sabuktigin, a slave commander of Turkic origin. His mother was the daughter of a prominent Iranian aristocrat. He had a younger brother named Ismail.

In 977, Mahmud’s father started the Ghaznavid dynasty. He passed away in 997, appointing his younger son Ismail as his successor. Mahmud was not happy with his father’s decision. In 998, he defeated his brother at the Battle of Ghazna and took over the dynasty. He became the first Muslim leader in history to hold the title of Sultan. In 999, he was officially recognized by the Abbasid caliphate.

Mahmud of Ghazni took the regions of Merv, Herath, Khorasan, and Balkh. He managed to destroy the remaining parts of the Samanid Empire. He took the Sistan region from the Saffarid dynasty. He then attacked Gandhara, Bhera, Multan, and Nishapur. In 1008, he defeated the Indian Confederacy and took over Delhi, Ajmer, Kalinjar, Kannauj, Gwalior, and Ujjain. In 1015, he tried to take over Kashmir but ultimately failed.

He then invaded Ghor, Gharchistan, Bulnat, and Kafiristan. He continued with Khwarezm, Muhavun, Meerut, and Mathura. In 1025, he attacked Gujarat and plundered the Somnath temple. In 1027, he took the cities of Hamadan, Isfahan, and Rey from the Buyids Dynasty.

Mahmud of Ghazni spent the next few years fighting against the Oghuz and Seljuk Turks that were invading his territory. He lost the cities of Nishapur and Merv to the Seljuk dynasty. His empire extended from western Iran to the Punjab region in India.

Mahmud of Ghazni's wife was named Kausari Jahan. They had twin sons, named Ma’sud and Muhammad. Mahmud spent a lot of time with Malik Ayaz, a male slave who became an army officer. The nature of their relationship is a subject of debate. Some historians claim they were in love; others claim they were just close friends.

Mahmud of Ghazni contracted malaria, which later led to tuberculosis. He passed away in Ghazni on April 30, 1030. He was 58 years old. His body was buried in a mausoleum which still stands in Ghazna to this day. After his death, his son Muhammad became the new sultan. The Ghaznavid Empire survived until 1186.