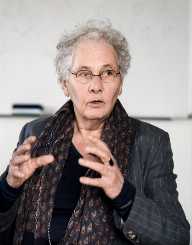 Christiane Nüsslein-Volhard is a German scientist and the 1995 Nobel Prize winner in Medicine. She shared the prize with Edward Lewis and Eric Wieschaus. The three worked hand in hand in embryonic development. She is best remembered for the various contributions in the field of genetics. But her embryonic development research stands tall among all her work. She has also authored some of the most valued books in her career. Her first book, for instance, was in 2002. It was released with the title Zebrafish: A Practical Approach. She is currently the director of the Max Planck Institute for Developmental Biology.

Christiane Nüsslein-Volhard was born on October 20th, 1942. Her place of birth was in Magdeburg situated in Germany. She is the daughter of Rolf Volhard and Brigitte Volhard. Her father was an architect professionally and was also a musician in his way. Her mother, on the other hand, had an eye for painting.

During her studies, Christiane Nüsslein-Volhard took great interest in German literature and science. She was a bright student exhibited by her good performance in her school work. After her graduation in 1962, she tried out a nursing course to see if medicine was among her interests. A month after enrolling in the course she made up her mind that her real interest was in Biology and not medicine.

She later joined the University of Tübingen where she studied biochemistry. By 1969 she attained a diploma in the subject. She also attained her Ph.D. from the same university. She conducted her post-doctoral research in Basel laboratory. The biologist Walter Gehring owned the laboratory.

Christiane Nüsslein-Volhard began her research career in 1978 at the European Molecular Biology Laboratory. It is situated in Heidelberg, Germany. She was the leader of the research group at the Laboratory. She was later joined by Eric Wieschaus, another biologist from America.

Four years after working in Friedrich Miescher Laboratory, she joined the Max Planck Institute for Developmental Biology. She has been the director of the institute since then. In 1992, she continued her research on genetics but this time on zebrafish. Her findings from the research have since helped further studies in the genetics of zebrafish.

Aside from her successful research career, Christiane has also authored books. Her first book of 2002 was titled Zebrafish: A Practical Approach.  She also authored Coming Back to Life: How Genes Drive Development.

In 1986, the German Foundation honored Christiane with the Leibniz Prize. This was for her great scientific contributions as a Germany- originating scientist. Later in 1991, she was once again awarded the Albert Lasker Award for Basic Medical Research. She received the award from the Lasker Foundation. She shared the prestigious Nobel Prize in Medicine in 1995 with Edward Lewis and Eric Wieschaus.

Not much is known about the marriage life of Christiane Nüsslein-Volhard. It is only believed that she acquired her title Nusslein from “her husband” before they divorced. She was still a young researcher at the time. The other names and more details of “her husband” are unknown.