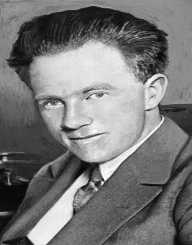 Werner Heisenberg was born in Wurzburg, Germany on the 5 December 1901. His parents were August Heisenberg and Annie Wecklein. His father was a professor of Middle and Modern Greek languages at the University of Munich.

The University of Gottingen appointed Werner Heisenberg as an assistant to Max Born and in 1924, he gained his teaching credentials at the University.

From 1924 until 1925, Werner Heisenberg worked at the University of Copenhagen, Denmark with Niels Bohr. Then in 1926, he was offered the position of lecturer in theoretical physics working under Bohr. In 1927 he became Professor of Theoretical Physics at the University of Leipzig in Germany. During 1929, he lectured in India, Japan, and the United States.

In 1925 Werner Heisenberg published his theory of quantum mechanics and was awarded the Nobel Prize in Physics in 1932. He won the prize for the theory and the applications which resulted from it, including the discovery of allotropic forms of hydrogen.

Werner Heisenberg became famous for his indeterminacy principle (the uncertainty principle) of 1927. He also published papers on the hydrodynamics of turbulent flows, cosmic rays, subatomic particles and the atomic nucleus.

During the 1940s, Werner Heisenberg was Professor of Physics at the University of Berlin as well a Director of the Kaiser Wilhelm Institute for Physics. He headed Germany’s research into nuclear fission. After the war had ended, Werner Heisenberg was arrested by Allied troops and spent time in England before returning to Germany in 1946. Controversy has always surrounded his research during World War II.

Yale University Press published the correspondence of Werner Heisenberg and Elisabeth Heisenberg for the period covering WWII. The book is entitled. Dear Li: Correspondence, 1937–1946. Elisabeth was living in Bavaria with their children, and the couple exchanged more than three hundred letters. The letters cover reasons why he chose not to immigrate and his attitude towards the atomic bomb.

After the war, he took up his position again as director of the Institute for Physics. Later he returned to England to lecture at Cambridge University and during the fifties he went on lecture tours to the United States. In the mid-fifties, he gave a series of lectures at the University of St Andrews in Scotland.

He was a consultant on the building of West Germany’s first nuclear reactor as well as a research reactor in Munich.

Werner Heisenberg produced hundreds of research papers and essays, and these are known as his Collected Works.

Werner Heisenberg works on issues associated with plasma physics and thermonuclear processes in his later years working with the International Institute of Atomic Physics. He was Chairman of the Scientific Policy Committee at the Institute and continued as a member after his chairmanship. He was appointed president of the Alexander von Humboldt Foundation, which was set up to encourage international scientists to work in Germany.

At thirty-one years of age, Werner Heisenberg won the Nobel Prize in Physics in 1932. He subsequently received numerous honors including the Matteucci Medal (1933) the Order of Merit of Bavaria and the Grand Cross for Federal Services with Star (Germany).

He was a Fellow of the Royal Society of London and a Knight of the Order of Merit.

Werner Heisenberg met Elisabeth Schumacher in 1936, and they married in January 1937. The couple had seven children He loved classical music, and it was a hobby of his.