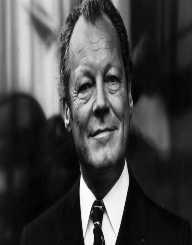 Willy Brandt was a German politician and statesman born on December 18th, 1913. He was once a Chancellor of the Federal Republic of Germany from 1969 to 1974. Meanwhile, from 1964 to 1987, he also led the Social Democratic Party-SDP. He is best remembered for his great efforts in trying to bring back the relationship between the Soviet bloc and his country. These attempts earned him the 1971 Nobel Peace Prize.  During Nazis rule, he fled Germany to return later. During his career, he authored books as well inclusive of his memoirs.

Willy Brandt was born on December 18th, 1913. His place of birth was Lubeck in Germany. He was the son to John Moller and Martha Frahm. His mother earned a living through a cashier. She struggled hard to make ends meet with the absence of Brandt’s father.

Willy Brandt never knew his father for they never met. He was brought up in poverty which taught him independence at a young age. His aim since he was a young lad was to bring great changes to his country in future. In 1929 he gained membership in the Socialist Youth. By 1930 he was a member of the Socialist Democratic Party.

Willy Brandt joined the Johanneum zu Lübeck after he passed his entry exams in 1932. However, he had to flee to Norway in 1933 to avoid being arrested by the Nazi. While in Norway he decided to study journalism. He co-established the International Bureau of Revolutionary Youth Organisations in 1934. He then was then appointed to be the first secretariat of the organization.

In 1937, During the Spanish Civil War, he put his journalism skills into action. He decided to be a Norwegian citizen in 1940 after his citizenship back in his country was revoked. He could speak fluent Swedish and Norwegian by that time.

Willy Brandt served in the Norwegian government in Berlin from 1946. He later became a member of the Social Democratic Party of Germany –SDP. Meanwhile, he regained his German citizenship. He was Berlin’s Governing Mayor from 1957 to 1966. Meanwhile, he also served as president of the Bundesrat in Bonn.

He lost to Konrad Adenauer in the 1961 chancellorship election. In 1964 he was appointed the chairman of the Social Democratic Party of Germany. He contested once again in the 1965 Chancellorship elections but lost to Ludwig Erhard.  In 1966, Christian Democratic Union of Germany –CDU merged with the SDP to form a coalition government. Brandt became the Vice-Chancellor and Foreign Minister of the coalition.

In 1969, Willy Brandt won the elections for the chancellorship. He became the Chancellor of the Federal Republic of Germany. While at this post he adopted New Eastern Policy, with the aim of reconciling with communist countries. Some of these countries include the Soviet Union, East Germany, and Poland among others.

Willy Brandt wedded Anna Thorkildsen in 1941. Together they had a daughter Ninja Brandt and divorced in 1948. In the same year, he married Rut Hansen. They were blessed with three children: Peter, Lars, and Matthias. The couple stayed together for 32 years but again divorced in 1980. In 1983 he married Brigitte Seebacher who remained his wife till the time of his death.

Willy Brandt died on October 8th, 1992 of colon cancer. He was 78 years old at the time of his death. He was laid to rest in Zehlendorf cemetery situated in Berlin.