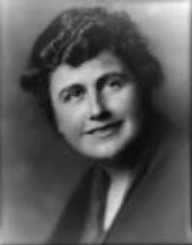 Edith lived within the limits of this large family. Edith’s grandmothers and many aunts and cousins were also the members of the Billing family. She most of the time in nursing the ailing members of the family such as washcloths.

Edith had no formal education. Edith learned at home how to read and write. She also learned to speak and write French and English from her grandmother Bolling. Her grandmother taught in Edith the habit of arriving at fast decisions, forming a strong view. William Bolling used to read English literature to the family members, appointed a teacher to Edith. Bolling occasionally took Edith on his travel. She was a follower of the church.

Edith joined the Martha Washington College, a school for girls in Abingdon, Virginia. She had to leave school because of its austerity measures, poor quality of food, cold rooms, and very severe syllabus and military type regulation.

After a gap of two years, Edith joined Powell’s School in Richmond, Virginia. She could not continue education there as its headmaster suffered injuries to his head and the school was closed. William couldn’t afford to pay for her education and had to stop educating Edith.

Edith had a chance meeting with Norman Galt during her visit to her sister’s wedding in Washington. Norman was a famous jeweler. Edith married Norman on April 30, 1896, and lived in Washington for 12 years. She had a son who lived for a very few days. She could not have more children because of some problem at the time of her first son. Unfortunately, Norman Galt died at an early age of 43. She engaged a manager to look after the business, cleared his loans and traveled throughout Europe.

Edith (widow Galt) was introduced to the widower, U. S. President Woodrow Wilson in 1915 at the White House by Helen Woodrow Bones. Bones was an official hostess after the demise of Wilson’s wife, Ellen Wilson. Wilson fell in love with the widow of Galt and proposed for marriage. There were some unsavory rumors that Wilson and Galt had killed the First Lady. Wilson requested Edith Bolling Galt to call off their engagement. However, Edith wanted that the marriage postponed for a year to complete the year of mourning for Ellen.

Wilson married Galt on December 18, 1915, in Washington DC. A small group of friends attended the wedding.

During the World War I, Edith Bolling Wilson, as a First Lady, had gasless Sundays, no meat on Mondays, no wheat on Wednesdays to help the public system of control. Edit even allowed sheep to eat grass on the lawn of the White House and didn’t use lawn mowers to mow the grass. The earnings from the wool from the sheep were sold in public and the proceeds donated to the American Red Cross.

Edith Wilson toured with Wilson to keep him fit because of the enormous tension and pressure he was undergoing due to the war in Europe. Edith was thoroughly engrossed in this task.

Edith Wilson discharged most of the duties till Wilson left the office. She was, in reality, the executive of the government till the second term till March 1921. She used to bring to the notice of the president only very important and crucial papers. In spite of all these, Edith did not take any decision on behalf of her husband. She was just sorting out files and left the judgment to Wilson.

The Republican Senators commented on her as Acting First Man. Later in her memoir, Edith Wilson justified her action in saying that it was necessary for her husband’s mental health as advice by the doctors. She received accolades and criticisms for her role in helping Wilson.

Edith Wilson settled in their home on S Street NW in Washington DC in 1921 when Wilson retired from his Presidency. She looked after him until his end.

She assumed the charge of the Woman’s National Democratic Club in 1924. Wilson breathed her lost on December 28, 1961. She could not attend the inauguration of the Woodrow Wilson Bridge fixed on that day being the 105th birthday of her husband. She was buried next to the president at the Washington Cathedral.

Edith Wilson published her My Memoir in 1939.

Edith Wilson donated her house to the National Trust for Historic Preservation and desired that it be converted into a museum in honor of Woodrow Wilson. The Woodrow House was inaugurated as a museum in 1964.

The first presidential papers in 1939 of Wilson were bequeathed to the Library of Congress. She also presented the personal library later in 1946.

Edith Bolling Wilson’s birthplace Foundation Museum in Wytheville, Virginia was founded in 2008. Her childhood home has been recognized in May 2013 and has been declared as Endangered Historic Site. A building has been planned there

A bank building in Wytheville was bestowed upon the First Lady and has her name. These set an example for all women.