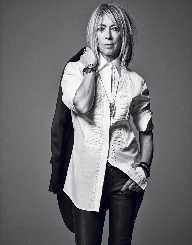 As a young adult, Kim Gordon attended the Otis College of Art and Design. It was while there that she began to take an extreme interest in playing rock music. Kim Gordon first began playing will all-girl bands, but later began to play with men instead. She also attended York University for a short time.

Kim Gordon helped to form the band Sonic Youth in 1981. The other original members of the band were Lee Ranaldo and Thurston Moore. Later on, Mark Ibold and Steve Shelly joined the band. In the same year the band formed, they signed on with Neutral Records. They later released their first studio album, Confusion is Sex, in 1983. The band had a style of music which was known simply as “experimental” at the time their first album was released. It was in part because the music wasn’t mainstream that it didn’t do well on the charts. This is likely the reason that Neutral did not produce more albums with this band.

In the mid-1980’s, Sonic Youth signed on with Homestead Records. In 1985, they released their first album with this company: Bad Moon Rising. This album did not make it onto any major music charts. They changed record labels again in 1986, to SST Records. They released two albums (neither of which charted) with this company: EVOL and Sister. In 1988, they signed on the Enigma Records and produced Daydream Nation. This was the first of their albums to chart. It reached #99 on the charts in the UK. In 1989, the released another record with Enigma called The Whitney Album. This record reached #63 on the charts in the UK.

In 1990, Sonic Youth changed record labels again, this time to work with DGC Records. In 1990, they released Goo, which was their first album to chart (at #96) in the US. From 1990-1998, Sonic Youth continued to work with DGC Records. During this time, they released five albums, including Dirty, Machine Washing, and A Thousand Leaves. The highest they ever charted in the US (during this decade) was #34, and #6 in the UK.

In 1992, Kim Gordon created another band called Free Kitten with another musician: Julie Cafritz. Yoshimi P-We also later joined this band. She still continued to play with Sonic Youth while he was a member of this band. This band released their first album, Unboxed, with Wiiija Records in 1994. The band released two more albums, this time with Kill Rock Stars, before the end of the decade: Nice Ass and Sentimental Education. During the 2000’s, Sonic Youth resumed going back and forth between recording labels. In 2000, they worked with Geffen to produce NYC Ghosts & Flowers. This record did terribly in the US and UK, charting below the top #100. In 2002, the band instead worked with DGC labels again to produce Murray Street. This record did better in the UK, but the US charting was still terribly slow.

In 2004, the band returned to Geffen to produce two more albums Sonic Nurse (2004) and Rather Ripped (2006). These albums did better in the US this time but fared poorly in other countries. In 2009, the band released its most recent album (with Matador) called The Eternal. This was their best-rated album of the decade. In 2008, Gordon also released another album with Free Kittens called Inherit on the record label Ecstatic Peace.

Outside of making music, Kim Gordon is also a fashion designer. She currently has two clothing lines out, called X-Girl and Mirror/Dash. She also works alongside the Sportmax clothing line. She has also been known to work as a model for other fashion brands, including Marc Jacobs.

Throughout college and her career as a musician, Kim Gordon also spent much of her time working on her own pieces of artwork. In 2010, she published a book that included pictures of her paintings. This book is titled Performing/Guzzling.

Kim Gordon has also written a memoir called Girl in a Band: A Memoir.

Kim Gordon has won the Q Award for Innovation in Sound while with the band Sonic Youth.

Kim Gordon married Thurston Moore in 1984. This couple has one daughter together: Coco. This couple is still married as of 2018.