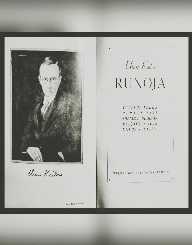 Uuno Kailas was a Finnish poet, author, and translator born on March 22, 1933. Though his life on earth was relatively short, his impact was felt in his poetry and other works. His popularity at the time was considered massive.

His poetry addressed topics on darkness, death, burden, and illness which was predominant at the time due to the frequent wars. He was a member of the Finnish army which invaded part of the Soviet Union in an attack known as the Aunus expedition in 1919. He was diagnosed with schizophrenia and tuberculosis and died in poverty.

Unno Kailas was born on March 29, 1901, in Heinola, Finland to ErvertKailaman and Olga Salonen. He lost his mother at age two during when giving birth. Having an irresponsible father, Kaila grew with a family member and had strict adherence to Christianity.

Hence he had a very religious upbringing from his grandmother. He had his primary education in Heinola and later at the University of Helsinki in 1920 where he studied aesthetics and history of literature. Kailas took part the Aunus expedition 1999 which was an attack on some parts of the Soviet territory. His excellent friend Bruno Schildt was killed during the raid.

During his studies university education, Uuno Kailas wrote several pieces and his first poetry collections Tuuli jataka was published in 1922. The publication did not meet Kaila's expectation regarding success, but that never broke him down. He continued with his writing career as a poet and translator. During this time he translated works by other writers and also wrote his critics on those works.

From 1923 to 1925 Uuno Kailas served in the army, but at the same time, he was very active in writing. He published Purjehtijat in 1925 a collection motivated by the German Expressionism with and infused with Christian and mythological symbols. He wrote and published several other collections until his health began to fail in 1929. He had schizophrenia, which is a mental illness brings about hallucinations.

His very last publication was Uni a Kuplema translated as Sleep and Death in 1931. The collection, which was about dreams and death predicted his eventual death two years later.

UunoKaila's life story was one characterized by sorrow and depression as most things couldn’t work for him. His love life was not successful because of his mental illness. He fell in love with Lyyli Pajunen whom he stayed with in 1926, but she later left because of his deteriorating psychological stability. It is also perceived that he had some sexual problems.

Four years before his death, he was diagnosed with schizophrenia and later tuberculosis. Uuno Kailas died in France on March 22, 1933, in Nice, France. He was cremated and ashes brought to Finland and buried in Helsinki.