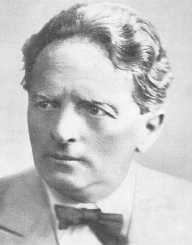 Love To Be Loved: Endre Ady

Endre Ady was born on November 22, 1877, in Érmindszent Szilágy County, Kingdom of Hungary. His father’s name was L?rinc Ady. He was born into a poor but noble Calvinist family. His mother’s name was Mária Pásztor, and he was the second of his parents’ three children. He was initially born with six fingers on each hand, but the midwife amputated them. The scars left behind by the amputation were called ‘wizard marks’ by Ady.

Endre Ady attended a Calvinist school during his childhood days. After the age of nine, he studied in a Catholic school. In 1892, Ady started attending the Calvinist College in Zal?u and subsequently completed his graduation in 1896. During his college days, he felt an attraction towards poetry and started writing the same. His first poem was published in the Zal?u newspaper Szilágy on March 22, 1896. Many of his classmates also became great personalities in their later life including political leaders and radical thinkers.

From a very young age, Endre Ady had an insatiable appetite for books and was profoundly impressed by the works of Arthur Schopenhauer. He studied law at the Reformed College in Debrecen immediately after leaving school. He found that his interest did not lie in the study of law. Though he completed his studies in law, he eventually began pursuing a career in journalism. In 1899, he published his first collection of poems called ‘Versek’ (Poems). The volume of poems did not elicit much response from the prospective readers and remained almost unnoticed.

Endre Ady was very critical about the backwardness of Debrecen. He moved to Nagyvárad. It was a city of his choice with vibrant cultural life. From 1900 onwards, he continued to work as a journalist for the rest of his life.

Endre Ady was an alcoholic, and mainly due to this alcoholism, he was unable to maintain a stable career in journalism. He had to switch jobs several times frequently shifting from one newspaper to another. During his stay in Nagyvárad, he came in contact with many like-minded and learned people. This experience helped him widen his viewpoint and gain a broader mindset. In 1903, he published another volume of his poems ‘Még egyszer.’ The signs of his talent and his literary skill were visible in this collection, but the volume again remained mostly unsuccessful commercially.

The turning point of his life came in the same year. In August 1903, Adél Brüll (Mrs. Diósy), a wealthy married Jewish woman living in Paris visited Nagyvárad, her native place. They met each other, and the lady became his muse. He followed her to Paris and shared a bonding of love which lasted for several future years. He made seven trips to Paris from 1904 to 1911, and his passion for the lady intensified his creativity and helped him grow as a poet and writer. In

1904, after spending almost a year, Endre Ady returned from Paris. After that, he moved to Budapest and started working for the newspaper Budapesti Napló (Budapest Journal). He contributed almost 500 articles and many poems over the years working in the paper. His interest in politics started his association with the radical group Huszadik Század (Twentieth Century). His third book of poetry ‘Uj versek’ (New Poems) was published in 1906. The work is considered to be a landmark in Hungarian literature, and it established him firmly as a new icon in the Hungarian literary circle. The book also marked a new beginning of modern Hungarian poetry.

In 1907, Endre Ady had to leave the job of Budapesti Napló. A new periodical called Nyugat (The West) published its first issue in 1908. The issue contained a poem and an essay by Ady. He started working for this periodical and became one of its editors in 1912. He worked with the magazine for the rest of his life. In 1908, a literary circle ‘A Holnap’ (tomorrow) was founded by the prominent Hungarian literary personalities. Ady was one of the founders. The circle published a collection of poems written by the leading contemporary Hungarian poets including the likes of Endre Ady, Gyula Juhász, Mihály Babits and Béla Balázs.

The Hungarian people did not like the contents and theme of these poems and accused the anthology of eroticism. Moreover, in one of his poems, Ady criticized the Hungarian peasant life and compared the vibrant cultural life to be far superior to the uncultured peasants’ life of Hungary. He was severely criticized for his unpatriotic feeling, and the poems published by the literary circle were seen with disapproval and incomprehension.

Endre Ady was very vocal and critical about the political situations of Hungary. His fierce criticism of the political affairs of Hungary made the Prime Minister István Tisza his prime adversary. In 1918, he published his last book of poetry. He wrote his last poem in a terminally ill condition. He was elected as the President of the Vörösmarty Academy, an organization of modern writers. However, he was unable to deliver his inaugural speech due to his ill health.

Endre Ady's affair with Adél Brüll (Mrs. Diósy) started in 1903. The relationship continued for nine long years, and Ady had fondly nicknamed her as Léda. On April 1912, he finally broke up with her. In 1914, he met a 20-year-old girl named Berta Boncza. He was in contact with the girl since 1911 through correspondence. They fell in love with each other and decided to marry. However, the girl’s father was against the marriage. In spite of stiff opposition, the couple got married in 1915 without the permission of the girl’s father.

Ady was an alcoholic for long and also contracted syphilis due to his polygamous nature. He was often treated in sanatoria since 1909. His condition worsened in the late 1910s, and he gradually became a terminally ill patient. He died on 27 January 1919, in Budapest. He was only 41 at the time of his death.