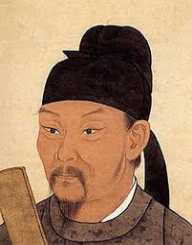 Du Fu was born on February 12, 712, in Gongyi, Henan, in China. His father was Du Xian, his mother, Cui Haitang. His mother died when he was an infant, and his aunt raised him. Du Fu had a brother who died at a young age. His father remarried, and Du Fu had four half-siblings.

He studied history, poetry, and the Confucian classics of philosophy. Du Fu's education was to prepare him for a career as a civil servant.

Du Fu traveled to Jiangsu/Zhejiang in the early 730s. He sat the examination to become a civil servant, but he failed. Due to this, he went back to traveling.

When his father died in 740, Du Fu could have joined the civil service. Instead of joining himself, Du Fu allowed one of his half-brothers.

In 744, Du Fu met the great poet Li Bai. The two became friends, and it was due to knowing Li Bai that Du Fu's artistic endeavors moved ahead rapidly.

Du Fu married in 752, and the couple had five children over the next five years. It was also around this time that Du Fu developed asthma. He moved his family during this period away from the unrest caused by a famine in the region.

In 755, the Crown Prince's Palace invited Du Fu to take up the position of Registrar of the Right Commandant's Office. Although he accepted, he never began work.

In December 755, the An Lushan Rebellion started. The rebellion took place over the next eight years. In the census of 754, records showed almost 53 million people registered. A decade later, the census recorded only 17 million people.

From 756 to 759 he worked for the court but left before long. He was in financial trouble, but one of his friends helped him out. Du Fu moved to Sichuan province in late 759, and he stayed there for the next five years. He wrote much of his poetry during this period as a result of being settled.

In 765, Du Fu and his family slowly made their way down the Yangtze river. They were returning to Luoyang, the area where he was born. He was in poor health, and the trip was slow.

In 768 when Du Fu continued his voyage, he reached Hunan province. Du Fu died in late 770.

The Encyclopaedia Britannica states that many literary critics consider the writings of Du Fu to be among the best of all time.

Du Fu was a great poet in China during the Tang Dynasty. Not only that, but his work had a profound influence on Japanese literature as well.