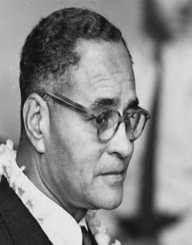 Ralph Johnson Bunche was an African American and won the Nobel Peace Prize. He was a politician and a diplomat. He was also the recipient of Presidential Medal of Freedom from President John F. Kennedy.

Ralph Bunche was born on 7th August 1904 to the couple Fred Bunche and Olive Agnes (nee Johnson). His father was a barber and his mother an amateur vocalist. They came from a large and intelligent family. Charlie and Ethel Johnson were his siblings. Bunche was born in Detroit, Michigan.

Bunche moved to Toledo, Ohio where his father searched for a job. The family returned to Detroit with the assistance from their maternal aunt, Ethel Johnson.

The ill health of his mother and uncle forced Bunche to relocate to Albuquerque, New Mexico along with his grandmother, Lucy Taylor, in 1915.

Here Ralph Bunche lost his mother, and his uncle committed suicide. Bunche was 13 at that time.

With the financial assistance from his community members, Bunche obtained his doctorate in political science from Harvard University in 1934. To make both ends meet, he took up a part-time job in a bookstore.

Bunche worked on post-doctoral research from 1936 to 1938 on anthropology at the London School of Economics and next at the University of Cape Town in South Africa.

In 1940, Ralph Bunche coordinated with Swedish sociologist, Gunnar Myrdal on the study of racial forces at work in the US.

During WW II, he worked in Office of Strategic Services, and the State Department. He worked under Alger Hiss as Associate Chief of Area Affairs in 1943. He contributed at the planning stage of the United Nations at the San Francisco Conference in 1945.

The First Lady Eleanor Roosevelt and Ralph Bunche were responsible for the Universal Declaration of Human Rights. He served the United Nations for 25 years.

During the Arab Israeli conflict, during 1947, Ralph Bunche actively mediated between the warring nations in the capacity of an assistant to the United Nations Special Committee on Palestine and later as the principal secretary of the UN Palestine Commission.

During 1948, Bunche assisted Folke Bernadotte who had been an appointee of the UN to negotiate between them. They were working from Rhodes as their Headquarters. Unfortunately, Bernadotte was assassinated in 1948 in Jerusalem.

After that, he accepted the full responsibilities to become the UN’s chief mediator.

Ralph Bunche achieved the Nobel Prize for Peace for the accomplishing the 1949 Armistice Agreement in 1950.

He continued his negotiations, and in 1968 he was appointed as Under-Secretary-General of the United Nations.

Bunche fought for the Civil Rights in the United States. He participated in the 1963 March on Washington and was responsible for the Voting Rights Act of 1965.

During 1966, his daughter Jane Bunche Pierce died presumably by suicide. Her husband Burton Pierce, an alumnus of the Cornell University, was an executive and they had three children.

Many of the houses where Bunche resided find a place on the National Register of Historic Places.

Bunche stayed in the Kew Gardens area of Queens, New York till his demise in 1971.

Ralph Bunche died on December 9, 1971, at the age of 68 from the difficulties of diabetes mellitus. His cremation was in Woodlawn Cemetery in The Bronx, New York City.

Ralph Bunche had several honors and awards, notable being the Nobel Prize for Peace in 1950.

Ralph Bunche has authored four books: A World View of Race (1968), The Political Status of the Negro in the Age of FDR (1941), A Brief and Tentative Analysis of Negro Leadership (2005), An African American in South Africa (1992) and Selected Speeches and Writings (1995).