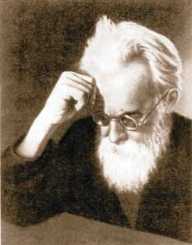 Crystallographer, mineralogist, geochemist and geologist Vladimir Vernadsky was born on the 12 March 1863 in St Petersburg, Russia to Russian Ukrainian parents. His father was descended from Ukrainian Cossacks on his father’s side, and his mother was Russian. His father was a professor of political economy in Kiev at the University of Moscow. The family later moved to St Petersburg where his father was the editor of the Economic Index. His mother, Hanna Konstantinovna, was the daughter of a general and belong to the Russian nobility. She was a music teacher.

Vladimir Vernadsky was schooled in Ukraine then studied at St Petersburg Grammar School. It was at Grammar school that he developed his interest in natural sciences. He did his tertiary study at the St Petersburg University specializing in mineralogy where he studied under V Dokuchaev, a famous scientist who specialized in soil science.

Vladimir Vernadsky’s report on the Paragenesis of Chemical Elements in the Earth’s Crust was presented to the 12th Congress of Medics, and Natural Scientists and this report are regarded as the beginning of the science of geochemistry. Vladimir Vernadsky founded the Radium Commission in 1909 and 1910; the first geochemical laboratory was founded in St Petersburg. He was the first scientist to clarify the idea of the noosphere, but it was an Austrian geologist who first used the name noosphere.

Vladimir Vernadsky was elected to the St Petersburg Academy of Science in 1912, and 1914 became the head of the Museum of Mineralogy and Geology. By 1917 he was starting to explore the emerging science of biogeochemistry and was involved in the development of the metal mining industry. Vladimir Vernadsky founded and was the first president of the Ukrainian Academy of Sciences which was set up in 1918. He was also was the founder of the National Library of the Ukrainian State.

Vladimir Vernadsky was a professor of mineralogy at Simferopol University but was later let go because of the political landscape in the 1920s.

He was also an adviser on the Soviet atomic bomb project and was an advocate for atomic energy, encouraging research to be done at the Radium Institute.

His most famous published work is Geochemistry. He also published two papers with Marie Curie: The Living Matter in Biosphere and Human Autotrophy.

Vladimir Vernadsky laid the groundwork for the study of geochemistry, and he is also remembered for his research on the noosphere about the biosphere.

Various memorials and honors have been awarded to Vladimir Vernadsky including a lunar crater named after him, the Vernadsky State Geological Museum in Moscow, a mountain range in Antarctica and a Ukrainian Antarctic station.

Vladimir Vernadsky married Nataliya Yehorivna Starytska in 1887, and the couple had two children: George and Nina.

His son George Vernadsky, a historian, moved to the United States and became known for his publications on Russian and Ukrainian history.

Vladimir Vernadsky died on the 6 January 1945.