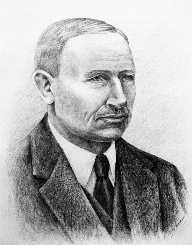 Anton Hansen Tammsaare was born to Peter and Ann Hansen on 30th January 1878. He was born into a large family, being the fourth of ten children. His father was a farmer, but the family was quite poor. He attended primary school at the Little Mary Parish School and did his high schooling in Tartu, which is the second largest city of Estonia.

Despite coming from an underprivileged background, Tammsaare was determined to study and earned money to pay for his education.

Anton H. Tammsaare enrolled at the University of Tartu to study a law degree and began his university studies in 1907.

Anton H. Tammsaare contracted tuberculosis in 1911 and had to withdraw from his studies. He never did finish university and got his law degree. He convalesced in a hospital in Sochi for about a year, after which time he moved in with his brother. He lived with his brother for about six years after that.

Anton H. Tammsaare loved both writing and music, and at one stage was deciding which direction to take with his career – writing or playing the violin, but due to his illness, he took up writing.

His writing career spanned approximately 40 years, from 1900 to 1940. During this time, he was a prolific writer, with a published work almost every year. His wide and varied bibliography included novels, plays, and short stores, but he was also known for children’s fairy tales. Anton H. Tammsaare chose the name of his parent’s farm as his pen name. The farm, today, is another museum to Tammsaare.

From 1903 to 1905, Anton H. Tammsaare worked as a journalist for the Tallinn Journal Editorial Board, which would have helped fund his schooling through university. Whilst Tammsaare was in university; he was already writing and being published. This was the early period of his writing when he produced works such as ‘Two Pairs and the One’ and ‘The Money-Hole.’

In the latter years of writing, Anton H. Tammsaare produced works such as ‘The King Is Cold’ and ‘China and a Chinese.’

The following awards were bestowed upon Tammsaare:

During the middle years of his writing, Anton H. Tammsaare produced his most well-known work, ‘Truth and Justice’, which was a five-volume set. This was the work that truly entrenched him as one of Estonia’s greatest writers. Indeed, in the international literary community, it was considered a masterpiece. It wasn’t translated into English until 2014 but was written over a seven-year period from 1926 through to 1933.

It is worth noting that the volumes didn’t have individual titles. It is also worth noting, that when Anton H. Tammsaare wrote his five volumes, he was also working as a journalist and translator, as well as helping to parent his children. The school of thought is that the critics would prefer volume one as the strongest in the set, as it embodies the true Estonian spirit.

Anton H. Tammsaare explained that the work was about ‘man’ and his relationship to the land, to God, to society and himself. His collected works were published in 18 volumes from 1977 to 1993. There were at least 25 titles published between 1902 and 1939.

Anton H. Tammsaare had several influences at different times during his writing career, both human and circumstances.

He had a keen interest in both psychology and philosophy, and the influence of the likes of Carl Jung and Sigmund Freud were evident in some of his novels.

Oscar Wilde was another well-known person who influenced Tammsaare’s writing.

Anton H. Tammsaare himself admitted there were no writers to compare with the Russians – Tolstoy, Dostoyevsky, and Gogol.

As far as circumstances, in his major work, ‘Truth and Justice,’ when he spoke about the Russian Revolution, it was evident that he spoke from experience, from a place of personal suffering, rather than just talking about an event that happened.

On a personal note, Anton H. Tammsaare married and had two children, a girl, and a boy. His wife was quite strong-willed, and it was she that took the upper hand in getting the relationship off the ground.

During the summers Anton H. Tammsaare would take his family on holiday, and whilst on holiday he would write his novels. Whilst the family had their holiday, Tammsaare seldom had a break, but such was his love of writing. As a writer, he has endeared himself to the Estonian people and will have a place in their history, and indeed in the world’s history, as one of their greatest writers.

Anton H. Tammsaare has also left a tangible legacy, the first of which is Tammsaare Park, named in his honor, which also houses a statue of him. The park is situated in Tallinn, in the city center near the Estonia National Theatre. The park was reconstructed in 1976, and the statue of Tammsaare was erected in 1978.

Not only can people enjoy the park, but they can visit the statue of Tammsaare. This is a visible monument that helps to keep his name alive as time passes. The Estonian Literature Centre also has an award in Tammsaare’s honor – the A.H. Tammsaare Literary Award.

The other tangible legacy is the Anton Hansen Tammsaare Museum.

This is also in the district of Tallinn. It is a summer house that has the apartment that Tammsaare lived in from 1932 to 1940.

Anton H. Tammsaare lived in apartment 4, and this has been restored to the original period. In apartment 3, next door, all the historical items are on a show that teach people about his life, as well as personal items that belonged to him.

The museum holds different exhibitions and performances throughout the year that can be attended. The museum is managed by the Tallinn Literary Centre. One of the purposes of the Centre is to keep the memory of Tammsaare alive.

As part of ‘giving back’, as well as writing, Tammsaare also translated the works of other famous authors such as Oscar Wilde and H.G. Wells into Estonian. What a gift for people to be able to read the works of literary artists in their language.

Anton H. Tammsaare was truly a hero of the Estonian people. Using the local country and people from his culture as the heroes of his work, he endeared himself to the nation and will live on as a major part of their history. Not only in memory, but the tangible legacies are also a constant reminder to the people of Estonia how talented and important Tammsaare was to their culture locally and on the world stage - a remarkably talented man, who despite his health setbacks lived a wonderfully full and creative life.