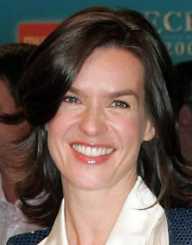 Ekaterina “Katia” Alexandrovna Gordeeva, is a phenomenal Russian figure skater, who made skating a delight to watch. Born on May 28, 1971, she performed together with her late partner and husband, Sergei Grinkov in pair skating and their 13 years of partnership, and they won two Olympic gold medals and four world championships.

Ekaterina Gordeeva first paired with Grinkov at the age of 11, they became friends, fell in love and married and together conquered the world. Grinkov died of heart attack in 1995, and since then Gordeeva continued to perform as a solo skater. Gordeeva later married 1998 Olympic men’s singles champion, Ilia Kulik in 2002. The couple divorced in 2015.

Ekaterina Gordeeva affectionately called “Katia” was born on May 28, 1971, in Moscow, Russia (then the Soviet Union). She was born to Elena Lvovna Gordeeva and Alexander Alexeyevich Gordeev. Her father was a dancer for the Alexandrov Song and Dance Ensemble and her mother a teletype operator for TASS. She has a younger sister, Maria Alexandrovna Gordeeva.

Ekaterina Gordeeva and her father practised movement from a very young age. Her parents travelled often. Therefore Gordeeva and her sister mostly stayed with their grandparents. Her father’s wish was for her to become a ballet dancer but that was not meant to be. At the age four, Gordeeva entered Children and Youth Sports School of CSKA Moscow, where she received early training in figure skating.

In 1981, at the age of 11, Coach Vladimir Zaharov paired Ekaterina Gordeeva with 15-year-old Sergei Grinkov. The pair later changed coach and started training under Stanislav Zhuk, head coach of the Central Red Army Skating Club. The new coach was very strict and overstrained the pair. In 1985, they won the World Junior Figure Skating Championship in Colorado Springs. They continued their winning streak by grabbing the World Figure Skating Championships the following year.

Ekaterina Gordeeva and Grinkov later petitioned the Central Red Army to change their coach; hence, they began training under a new coach, Stanislav Leonovich then in 1986. The partners successfully defended their world title the following year, becoming one of the few pair teams to win it back to back. The two later began an American tour with skating promoter Tom Collings.

Ekaterina Gordeeva and Grinkov successfully competed and won a gold medal at the 1988 Winter Olympics despite returning from sickness. This made them the youngest pair team to win Olympic gold. They continued the season at the World Championships, winning silver after a fall in their long program. The came back strongly in 1989 to win the championship and retained it in 1990.

In 1990, Ekaterina Gordeeva and Grinkov turned professional, winning their maiden Professional Championship the following year. They defended the title in 1992 and won it again in 1994. The pair continued with their prolific performance winning, almost all competitions they partook. They returned to their amateur status for the 1993 to 1994 season to enable them to participate in the Olympic Games. Gordeeva and Grinkov won their second Olympic gold medal in 1994 in Lillehammer, Oppland, Norway.

They returned to professional skating after winning the Olympics. They toured with Stars on Ice for the 1994-95 season. Grinkov collapsed and died from a massive heart attack on November 20, 1995, while rehearsing in Lake Placid, New York. Gordeeva and Grinkov are mostly considered as the most magnificent pair ever to grace the ice.

A year after the death of his partner and husband, Ekaterina Gordeeva returned to the ice as a solo skater. Her debut solo performance was a tribute to Grinkov. That same year, she returned Stars on Ice, touring with the show until 2000, when she gave birth to her second child. She released the book My Sergei: A Love Story alongside author E.M. Swift in 1996. Two years later, she published her second book, A Letter for Daria. Despite not returning to pair staking fulltime, she has performed with the likes of John Zimmerman, Anton Sikharulidze, Arthur Dmitriev and David Pelletier among others. She starred in the show, Stake for the Heart, 2017, aimed at raising awareness on heart diseases.

Performing together for long enough, the two began built strong bond and this developed into love. On April 20, 1991, Ekaterina Gordeeva and Grinkov had a state wedding. On September 11, 1992, the couple welcomed their daughter, Daria Sergeyevna Gordeeva-Grinkova. Grinkov died of heart attack on November 20, 1995, during a practice in Lake Placid. He later dated 1998 Olympic men’s singles champion Ilia Kulik with whom she had a daughter Ilinichna Kulik on June 15, 2001. They married at a private ceremony on June 10, 2002, in San Francisco.