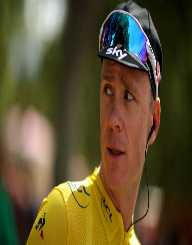 Cyclist Chris Froome was born in Nairobi, Kenya on 20 May 1985 to Clive and Jane Froome.

Froome got involved in cycling when he was still a pre-teen. David Kinjah, the Kenyan cyclist, would allow Chris tag along on rides through the Kenyan countryside. This early experience of being so young and trying to keep up with older, fitter riders inspired him. When Chris was 14, he was sent to boarding school in South Africa. He continued with his cycling and also started playing the national game, rugby.

Chris Froome’s early education took place in Kenya. Later he was sent to boarding school in South Africa, and this was followed by two years studying finance at the University of Johannesburg.

Chris Froome married Michelle Cound in 2014, and they have one child.

Despite studying finance at university, all Chris Froome wanted to do was the cycle. In 2006, he represented Kenya in the Road World Championship in Salzburg, Austria. He turned professional age 22 and joined the Team Konica Minolta in South Africa. In 2008, he signed Team Barloworld and in his second season had a significant breakthrough when he cycled in the 2008 Tour de France. He finished at 84 overall and 11th in the young riders section. In 2009, he tackled the Giro d'Italia and finished at number 36.

When Chris Froome first arrived on the European cycling scene, Froome was an enthusiastic but inexperienced cyclist, and he had some mishaps. He found the alpine descents a bit of a challenge and once he hit a marshal. Despite his inexperience, the British coach Rod Ellingworth was impressed with the young cyclist. Ellingworth suggested he join a British racing team. Froome was allowed to do so because of his British heritage. Froome subsequently joined Sky, an emerging British squad.

During 2011, Chris Froome was troubled with illness. Eventually, bilharzia was diagnosed, and he was able to get the required treatment. He missed the start of the season but was soon able to participate, more energetic because of his treatment and recovery. His form continued to improve but bilharzia can be a persistent disease and in 2012, symptoms reappeared. Froome went on to overcome bilharzia and to win the Tour de France three times in 2013, 2015 and 2016.

Chris Froome was diagnosed with bilharzia in 2011. It is an acute and chronic disease caused by parasitic worms. The disease is found in fresh water in tropical regions.

Chris Froome has written an autobiography entitled The Climb.

Chris Froome was a bit over-enthusiastic and inexperienced when he first started professionally in Europe and these caused minor furors.