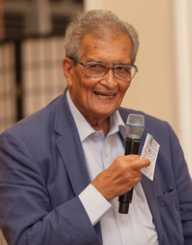 Amartya Sen was born in Santiniketan, West Bengal, India. His father was a professor named Sen, and he worked with West Bengal as chairman of the Public Service Commission. His mother was called Amita Sen. Amartya Sen attended at the St. Gregory’s School, Dhaka in 1941. Following the division of the large country into Bangladesh and India, his family moved to India. There he studied the Vis-Bharati University School. Sen graduated with First Class honors in B.A. Economics from Presidency College, Kolkata in 1953. At the same year, he received another B.A. at the Trinity College, Cambridge.

Amartya Sen's  book titled ‘Collective Choice and Social Welfare’ was published in 1970. This is one of his most influential theses that deal with the issues of primary welfare, justice, equality and individual rights. Amartya published another book titled ‘On Economic Inequality’ in 1973. The book was about the study of the theory of welfare economics about the study of economic inequality. Amartya Sen emphasized the cause of lack of food supply, malnutrition and analysis of famines in an essay he wrote in 1982. It is a powerful essay entitled, ‘Poverty and Famines: An Essay on Entitlements and Deprivation.’

Amartya published his work in 1984 on developing economies; it was called ‘Resources, Values, and Development. The book was directed on the investment design, shadow rating, employment policy, and welfare economics.
Sen's book “On Ethics and Economics’ was published in 1987. It was a critical piece of writing that claimed that welfare economics and modern ethical studies could benefit from each other. Amartya Sen wrote a controversial essay titled ‘More Than 100 Million Women Are Missing’ for The New York Review of Books in 1990. The essay presented the reality and the reasons for the gender imbalance. Sen printed another book in 1992 with the title ‘Inequality Re-examined.’ The Harvard University Press published it. The book scrutinized the concept of inequality and directed mainly on the ‘capability approach.’

Amartya Sen  published a Nobel Prize Lecture in 1998 titled ‘The Possibility of Social Choice.’ In this book, Amartya affirmed that welfare economics was a core theme in social change theory. In 1999 Amartya Sen wrote a book titled ‘Development as Freedom.’ He stressed on the notion of ‘international development’ and ‘development economics.’ Sen published a two volumes book on rationality, freedom, and justice in 2001. It was titled ‘Rationality and Freedom.’ He created an illuminated vision into each of these concepts. The sen's publication, ‘The Argumentative Indian’ was admired and famous. It was published in 2005. The book is a compilation of essays on history and identity of India. It also deals with the need to understand contemporary India and its argumentative tradition.

Amartya Sen came out a book titled; the idea of Justice’ in 2009. Allen Lane and Harvard University Press published it. He emphasized in this book the economic reasoning and a critique of John Rawls book, ‘Theory of Justice.’ Amartya Sen examined the relationship between violence, peace, and democracy in his book ‘Peace and Democratic Society.’ He investigates into the theory of ‘organised violence,’ war, genocide and terrorism. It was published in 2011.

Amartya Sen is a well-liked, award-winning economist.Amartya is a writer and philosopher. He presented the plight of the underprivileged and starving people. He is diligently engaged in the problems of the society’s poorest people. He came out with practical solutions to prevent the shortage of food and starvation. Amartya Sen was included on Time Magazine’s list of ‘World’s 50 Most Influential People Who Matter’. A Nobel Laureate who helped in creating the United Nations Human Development Index. He is an outstanding intellectual. Sen’s book has been translated into more than thirty languages all over the world.

Some of the Sen's remarkable publications include, ‘Development as Freedom,’ ‘Poverty and Famines: An Essay on Entitlements and Deprivation,’ ‘On Economic Inequality,’ ‘Inequality Re-examined,’ ‘The Argumentative Indian’ and ‘The Idea of Justice.’ Presently, Sen is a Professor of Economics and Philosophy at Harvard University. Sen has also been a Professor at the London School of Economics and The University of Oxford. Amartya Sen has won a range of achievements including the Bharat Ratna, the highest civilian award in India. Devotedly committed to the cause of ending poverty and deprivation, his works highlight solutions for a more egalitarian society. This celebrated economist is the sixth Indian to receive a Nobel and the first Asian recipient of the Economics Prize.

Amartya Sen's  book, ‘Development as Freedom’ was recognized by the Nobel Prize committee. It was established as a vital contribution in the field of economic development theory. One of Sen's influential works, a 1992 book titled ‘Inequality Re-examined,’ is an acclaimed book that brought together all the essential themes of his work from over a decade. In this publication, Amartya tackles some of the most important concerns of inequality. Amartya Sen received the Adam Smith Prize award in 1954.