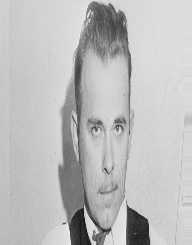 John Herbert Dillinger was born on June 22, 1934. His father owned a neighborhood grocery store and was a diligent churchgoer. Still, his father was also abusive and at times would hit his sons and then later give him money for treats. Dillinger had an older brother and a much older sister.

Dillinger’s mother died of a stroke when he was three years old. After his mother’s death, his sister Audrey took care of him until she got married. Dillinger was then 16 years old and quit school because he was bored with it and wanted to start earning money. In 1920, his father sold the grocery store and retired to a farm in Mooresville, Indiana. Dillinger was at the time working at a machine shop in Indianapolis and continued to go to work on his motorcycle.

During his time working at the machine shop, Dillinger was involved in illicit nighttime activities. The matters spanned out of control when he stole a car outside of a church in 1923. The police were suspicious of him and tried to place him under arrest, but Dillinger managed to run away. He knew that he couldn’t come home and the following day joined the U.S. Navy.

Dillinger quickly realized that he is not meant for a life in the army. After finishing basic training, he was assigned to the U.S.S. Utah ship. Dillinger jumped ship and afterward ended his army career with a dishonorable discharge. Upon his return, Dillinger married Beryl Hovious and tried to settle down in Martinsville. He also played baseball at a local team and met Edgar Singleton.

Singleton told him about an older grocer who carries his daily receipts from work to barbershop. The two made a plan that Dillinger will rob the man while Singleton is going to wait in a getaway car. Dillinger was armed with a .32 gun, and when he clubbed the grocer, the man turned and grabbed Dillinger and his gun, forcing it to discharge. Dillinger ran towards the street where Singleton was supposed to be, but he was not there. The police soon caught Dillinger. Dillinger turned up to his court hearing with no legal representation. He was sentenced to 10 to 20 years in prison.

After his sentence, Dillinger was sent to the Indiana State Reformatory in Pendleton. During his time at the prison, Dillinger played at the institution's baseball team. He was also working at the prison factory and complete his quotas as well as helped to fill other men’s quotas. This led to him gaining a lot of friends and allies.

At first, his wife and family visited Dillinger often. But later the separation was too hard on his wife, and she divorced Dillinger on June 20, 1929, just two days before his birthday. The same year, Dillinger was also denied parole. He asked to be sent to Indiana State Prison in Michigan City, claiming that the prison had a better baseball team. But that was not the main reason- Dillinger wanted to join his allies Pierpont and Van Meter, who were sent there earlier. They were later a part of Dillinger’s gang. He didn’t have things easier in Michigan, where his spirits lowered, and Dillinger buried himself in labor. During his time in prison, Dillinger learned the ropes of crime from other criminals.

Pierpont and Van Meter were already planning a prison escape when Dillinger got transferred. They needed money to finance their jailbreak and Dillinger’s sentence was the shortest. They quickly brought him in on their plan. In 1933, Dillinger’s stepmother was close to dying, and he was granted parole, after serving four years of his sentence. His stepmother died before Dillinger got out. Dillinger joined some of Pierpont’s men on a string of robberies and arranged several guns to be placed in boxes and snuggled in the prison shirt factory.

Police was following Dillinger’s movements and caught him when he was collecting funds for the prison break. Dillinger was sent to Allen County Jail in Lima, Ohio. At the same time, Pierpont and Van Meter had escaped from prison and were safe in their hideout in Hamilton, Ohio. The two soon realized that with some money and a few guns they would be able to get Dillinger out too. While trying to get the jail keys, Pierpont shot the sheriff and another officer, making all members of the crew accessories to murder. After this, the gang moved to Chicago and put together one of the most organized bank robbing gangs in the country.

Dillinger’s gang became known as one of the most notorious gangs in the country. They lived in expensive apartments in Chicago and never did drugs or drank alcohol during the planning and doing their crimes. The gang started their work in late 1933 and committed several bank robberies. The robberies were known to be meticulously planned and a bit theatrical. They moved their work also to Florida and Arizona. After a robbery of First National Bank in East Chicago went badly, Dillinger and several members of his gang were arrested. Dillinger had to stand a trial for robberies and murder of a police officer.

While waiting for trial, Dillinger was placed in the “inescapable” Crown Point Prison. Despite its reputation, Dillinger managed to escape. He stole the sheriff’s car and made his way to Illinois, which meant crossing the state line. This felony attracted the attention of FBI. Upon his arrival in Chicago, Dillinger put together another gang. The gang relocated to St.Paul in Minnesota and went on a robbery spree. The FBI was on their trail and Dillinger was forced to hole up in Little Bohemia, Wisconsin.

In Little Wisconsin, Dillinger went to stay at a lodge, but the owner recognized the notorious criminal. The owner feared for his family’s safety, despite Dillinger’s assurance that there will be no trouble. He wrote a letter to the U.S. Attorney George Fischer revealing his guest’s identity. On April 22, 1934, FBI agents arrived at the Little Bohemia lodge, but Dillinger and his gang members managed to escape, killing a civilian and an FBI agent.

After his escape, Dillinger was labeled America’s first Public Enemy No.1. It became hard for Dillinger to hide out, so he underwent a facelift. During this time Dillinger was seeing Anna Sage. She owned a brothel but was facing deportation. She met with agent Purvis and became an informant.

On July 22, 1934, Sage informed the FBI that she and Dillinger would be going to a movie theater. Agent Purvis was staking out at the Biograph theatre as Dillinger walked past him. He signaled other agents and ordered Dillinger to surrender. He attempted to run but was shot.