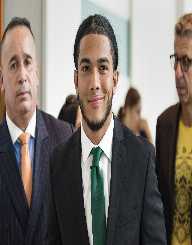 The Bronx terrorist, Pedro Hernandez once served in a retail business near Etan's neighborhood. Living an ordinary life was his best bet yet till when he lured the little lad, Etan in his basement. Well, the reality is that Pedro Hernandez choked the child to death. It isn't yet clear what was his motive or the message he tried to put across. It all happened over four decades ago in 1979. A healthy warning, the event still makes the blood to boil and heart to pound.

An affirmation called that Pedro Fernandez was a drop out school teen at the age of 18. He lived in Camden. Later, Pedro moved to New York and then went to New Jersey again after the incident. To get rid of the evidence, he continued his healthy life as a sales assistant in a dress workshop. Sorry, that is the little information we have for Pedro Hernandez as at now.

Etan Kalil Patz or Etan as he was called was a six-year-old boy in Manhattan. He saw his first on 9th October 1972. Sadly he didn't live to tell his childhood life and tale. Scroll further.

On 25th May 1979 Etan Patz left his home to go to the bus stop. It was his very first time to walk himself from his apartment to the bus stop. Probably his parents trusted him since it was only a short distance away. Sadly, the little lad never made it home nor in school. He disappeared in an unspecified place but most probably between the bus stop and his home. From the legal viewpoint, Etan was declared dead in 2001. This was after 22 years of agony and denial from his parents, Julie and Stanley Patz.

Soon, Patz smiling facial expression crowned Manhattan. The media did their best to cover what had indeed happened to Etan. As a result, the nation got shocked, and 25th May was officially approved as National Missing Children's Day. Remember, he became the first missing child in the US.

More than a Heartbreaking Mystery

Etan's face was first to come into sight on water paper cartons that packaged milk. It was the simplest way to pass the message across for the missing child. We don't want to imagine what other parents felt or did for their kids. In fear, guess they employed parental techniques and tracking systems.

Pedro Hernandez' lawyers argued that he had mental deprivation. But if he differentiated between fantasy and reality, then he was sane and ready for trials. That was just but a precaution that the legal officer settled with for Pedro Hernandez.

Pedro's suspicion from the investigators didn't call till 2012. His blood brother confirmed to the police that he made negative sentiments. Moreover, the statement was that he would one day kill children in his neighborhood. Well, that was just enough evidence to prove his guiltiness.

After the suspicion, authorities attention netted to no one else than Pedro Hernandez. For over three decades, Etan's parents were sure that victory was bound to near.

For the second time, after endless trials, Mr. Hernandez was sentenced on 28th February in 2017. The final verdict at 56 years sent him to twenty-five years in jail. Peter was charged with both murder and kidnap.

It's a Cautionary Tale

To date, there is no physical proof of Etan Patz. It isn't a doubt, and the case plagued New York City and the Bronx. In a real sense, Etan's parents could never let go of what happened to their son. In all, they were glad for the upright move of NY's legal expertise and Pedro’s final verdict.

Etan vanishing made a difference of how parents broached the general approach of childcare in the city and New York at large.