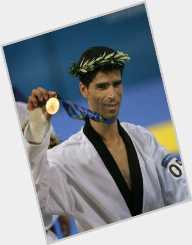 Olympian champion Hadi Saei was born on June 10, 1976, in Ray, Iran. He started learning Taekwondo at the age of six.

Saei won sixteen gold medals, three silver, and four bronze medals before his retiring from the sport in November 2008.

Hadi Saei as elected the Chairman in 2011, he was elected Chairman of the Nassaji Mazandaran Football Club in Mazandaran, Iran. He has also served as a member of the Tehran City Council.

In 2004 Hadi Saei was named Iran’s Sportsperson of the Year. He is one of three Taekwondo experts to have won two Olympic gold medals (2004, 2008) and one of two to win bronze as well as gold at an Olympic Games (2000). He was also Iran’s sole gold medalist at the Athens Olympics in 2008.