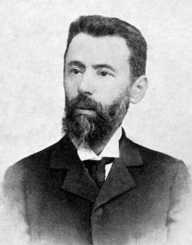 Richard Dedekind was a German Mathematician born on October 6th, 1831. He taught mathematics in many institutions during his career. The great mathematician found chemistry and physics to be boring during his early studies. He chose to pursue mathematics and realized that it was his favorite subject.

He never looked back since then and pursued the subject in all his studies and made it his career. He was never married and spent most of his life in his hometown Braunschweig in Germany.   He chose to be single, and so did his elder sister Julia.

Richard Dedekind was born on October 6th, 1831. His place of birth was in Braunschweig situated in northern Germany. This is where he spent almost his entire life and even died there. He was always referred to as Richard Dedekind and Julius Wilhelm was omitted. His parents were Julius Dedekind and Caroline Emperius. Julius was a lawyer professionally. He worked at Collegium Carolinum situated in Braunschweig as an administrator. His maternal grandfather also worked at the same institution as his father. He was a professor. He had three elder siblings.

In 1838, Richard Dedekind studied in Gymnasium Martino-Catharineum situated in his hometown. He studied at the school till 1847. During this time, he thought chemistry and physics were quite boring hence he chose to major in mathematics later in his studies. He joined Collegium Carolinum still in Braunschweig in 1848 till 18950. He then immediately enrolled in the University of Gottingen. By 1852 he attained his doctorate. He later studied in the University of Berlin for two years.

Richard Dedekind began his career as a volunteer geometry lecturer in 1854. This was at the University of Gottingen. He served at the position till 1858. Meanwhile, he furthered his knowledge in mathematics along with Peter Dirichlet.

He published Dirichlet’s lectures in a book in 1863. He later published his findings on irrational numbers of 1872. He retired from teaching in 1894 after teaching at Technische Hochschule situated in Braunschweig. He then continued writing books on different mathematics topics.

In 1862, Richard Dedekind was appointed to many academies throughout his career. The first election was to the Gottingen Academy. In 1880, he was once again elected to the Berlin Academy followed by the Academy of Rome. Later in 1900, he was elected to the Academie des Sciences of Paris. He was also presented with degrees of honorary doctorates from some institutions. These include the Zurich University, the Kristiania University and the University of Braunschweig.

Richard Dedekind never married in his entire life. Instead, he lived with his sister Julia. She was never married as well. The two lived in their home town of Braunschweig. Dedekind was a health man for most of his life. The only time he fell ill was after his father passed on. He received treatment where he recovered fully. He has since then lived a healthy life. During his holidays, he loved traveling to different places like Switzerland, the Black Forests of Germany and the Austrian Tyrol.

Richard Dedekind took his last breath on February 12th, 1916 at Braunschweig in Germany. He died of natural causes given he was a health man almost his whole life. He was 84 years old at the time of his death.