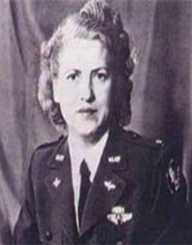 Jacqueline Cochran was born on 11 May 1906 in Florida, to a craftsman's family. Born with the name Bessie Pitman, she was the youngest of five children. Despite this, the young woman was well provided for.

She grew up quickly. At the age of fourteen, Bessie married Robert Cochran and gave birth to a son. The boy tragically died at five years old, and she and the boy's father divorced soon after. The ordeal naturally made her want to escape. Bessie quickly moved to New York to start afresh, keeping her ex-husband’s last name and changing her name to ‘Jacqueline.’ This was how the world knew her from then onwards.

In New York, Cochran made use of her charisma and beauty to her advantage. She worked for a while in different salons, mixing with the city’s brightest (and most productive). Along the way she even met Floyd Odlum, one of the most powerful men in Hollywood, who offered to help her start a cosmetics company.

Jacqueline Cochran could’ve made a comfortable living in the New York beauty industry. Her sights, however, were set elsewhere. At around 25 years old a friend offered her a ride in a private plane, and she quickly fell in love with aviation. Cochran promptly began taking flying lessons and was already a confident pilot after a month of training. In two more years, she got her license. The limits of Jacqueline Cochran’s world, now, were how far she was willing to fly.

Like any good entrepreneur, Cochran also learned how to mix business with pleasure. She married Floyd Odlum in 1936, just after his divorce, and made full use of his business expertise. Cochran liked to fly, and she loved the booming industry of cosmetic and beauty products for women. With Odlum’s help, she soon started her line of products and flew around the United States to promote them in different cities.

Jacqueline Cochran's contribution to history, however, was apparently in aviation. In the same period as Amelia Earhart, Cochran was one of a small number of female pilots to find success and considerable fame. Cochran took part in races, opening up once male-only events to women. By 1938, just before the outbreak of the Second World War in Europe, she was considered one of the best female pilots in America.

Cochran’s skills made her a valuable member in the US war effort. The idea that women pilots could serve in the War was not on the table at first. Then, Cochran wrote to US First Lady Eleanor Roosevelt and got the ball rolling. Two years into the War the Army asked Cochran to draw up a list of experienced female pilots who could serve. Of these, Cochran and around 25 others took part in ferrying missions in Great Britain. Cochran later returned to the US and trained female pilots for the rest of the War.

After the War ended, Cochran worked for a while as a journalist. She visited US-occupied Japan and attended the Nuremberg Trials. But she was never delighted with this, and soon returned to working with the Air Force. Reaching the rank of colonel by the end of her service, Cochran spent over twenty years as a pilot. During this time she was awarded three medals - the ‘Distinguished Flying Cross’ - to go along with her medal for distinguished service in the war.

Ever full of life, Jacqueline Cochran even tried her hand in politics. She ran for Congress in 1956, representing the Republican Party, but narrowly lost the election. Elsewhere she was a fervent supporter of General Eisenhower. Some have even claimed she convinced him to run for President, with Eisenhower leading the country through a crucial period of the Cold War.

Through it all, Cochran kept in touch with her family. Though she had moved far away, in many ways, she never stopped being the young woman who’d left. Cochran never became as famous as Amelia Earhart, her counterpart. When she died in 1980, however, she left a legacy no one has ever matched. Which other female pilots, after all, flew as high as she had?