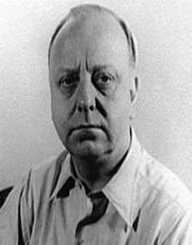 Virgil Thomson was born 25th November 1896, in Kansas City, Missouri, in the United States. When he was young, Thomson learned piano, and as his teacher was the organist at a church, he would regularly play the church organ.

After serving in World War I, Thomson enrolled at Harvard University. He was able to borrow money from the father of one of his close friends, Alice Smith. Thomson studied piano works at Harvard, particularly by Erik Satie, a French composer.

Thomson graduated from Harvard in 1923, and he moved to Paris in 1925. He lived there until 1940, and he became a well-known identity in the French city.

Virgil Thomson met his life partner, Maurice Grosser in 1925 while he was in Paris. Grosser was an artist, and the two regularly collaborated in their artistic endeavors. He also became good friends with Gertrude Stein, and he wrote operas with Stein that included Four Saints in Three Acts (1928), and The Mother of Us All (1947).

In 1940, Thomson accepted a position with the New York Herald Tribune as their music critic. He was with the Tribune until 1954.

In addition to all his musical compositions, he also wrote music for exhibitions, including Metropolitan Museum Fanfare: Portrait of an American Artist in 1969, and film scores. Grosser died in 1986, and Thomson died three years later, on 30th September 1989.

Among his many awards and honors, Virgil Thomson received the Pulitzer Prize in 1948, and the National Medal of Arts in 1988.