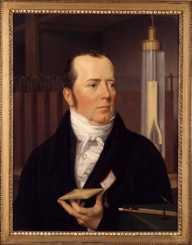 Hans Christian Ørsted was a Danish chemist and Physicist best remembered for his concept on electromagnetism. He discovered the relationship between magnetism and electricity.  He made his major discoveries that brought great developments even later in the 19th century. He was the founder of Selskabet for Naturlærens Udbredelse-SNU in 1824. This was a society for passing on information especially in the field of social sciences. He was the pioneer behind the thought experiment detailed explanation.

Among his closest friends was a Danish author Christian Andersen. His brother Anders Sandøe was the prime minister of Denmark from 1853 to 1854. His father was a chemist hence Ørsted was brought in a scientific environment. This was a great influence on him which led to the scientific man he came to be.

Hans Christian Ørsted was born on August 14, 1777. His place of birth was in Rudkobing situated in Denmark. His father Soren Christian introduced him to chemistry for. He was a chemist who owned a pharmacy. As a young boy, Ørsted helped out in running the business.

Hans Christian Ørsted came from a large family. He was forced to leave their home and live in Germany with Anders, his younger brother. He lived with a wigmaker in Germany.

Hans Christian Ørsted and Anders homeschooled themselves for their early education. In 1783 they passed their entrance examinations to the University of Copenhagen. Ørsted studied physics and aesthetics and graduated in 1796. He presented his thesis based on "The Architectonics of Natural Metaphysics" by Immanuel Kant and was awarded his doctorate in 1799.

Ørsted began his career as a pharmacy manager which only lasted for a few days. He quit his job so he could further his journey in scientific research. He was acquainted with Johann Ritter in Gottingen who was working on the effects of chemicals on electricity. Hans Christian Ørsted came up with new ideas for the research. He later defended the findings of Johann Ritter in Paris.  His knowledge widened further when he worked other scientists during his travels. In Berlin, he met Franz Baader and Henrik Steffens.

He later gave lectures in public which earned him great fame upon which it landed him a position in the University of Copenhagen. He became a professor at the university, and meanwhile, he published his scientific papers. His paper in 1812 mainly described the connection between chemical forces and electrical forces.  He came up with the research while in Berlin.

In 1820 his research led to his discovery in the electromagnetism force.  In the same year, the Royal Society of London awarded him with the Copley Medal. This was for his scientific contributions that year.  He established the society for passing knowledge of social sciences in 1824. It was named Selskabet for Naturlærens Udbredelse-SNU. In 1825 he became the pioneer to obtain an elemental form of Aluminum after reducing aluminum chloride. He established the current Technical University of Denmark in1829. It was originally known as Den Polytekniske Læreanstal.

Hans Christian Ørsted was also a poet and a writer. He wrote the poem series Luftskibet. Before he died, he presented his work on "The Soul in Nature” for publication. The book contains his views and philosophies.

Hans Christian Ørsted took his last breath on March 9, 1851. He died in Copenhagen when he was 73 years old.