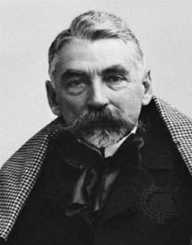 Stéphane Mallarmé, also known as Etienne Mallarmé, was a well-known poet and critic from France. Due to his symbolist artwork in the early 20th century, many new creative schools, for example, Cubism; Futurism, Dadaism, and Surrealism were openly enthused by his work. Growing up, Stéphane lost his relatives and became depressed. He developed a desire to break away from the cruel happenings, and he thought that the world was being unfair to him.

Stéphane Mallarmé began a career as a school teacher and carried on with teaching until 1893. From there Stéphane started his corresponding profession in poetry writing. This indulgence in poetry was a quest to look for refuge in a perfect world and to run from the brutal reality of his world.

‘L’Aprés Midi D’un Faun,’ ‘Hérodiade’ and ‘Toast Funèbre’ are among many of his well-known works. His pieces were perceived to be difficult because of the syntax he used. Without a doubt, he made an undisputed track record. Stéphane Mallarmé even forms part of the list of most excellent writers during the early 19th century. He made a significant impact on French literature, and his name and work will be remembered for a long time.

Stéphane Mallarmé was born on 18th March 1842 in Paris to NumaMallarmé and Elisabeth Desmolins. His father was a civil servant. Stéphane did not have the luxury love, console and security of a family unit for long. His mother passed away in August 1847, and shortly in 1857 his younger sister Maria also died. His life worsened in 1863 when his father also died. Despite the difficult times in his life, he attended school, and he enjoyed a relatively healthy school life though not a permanent one.

Stéphane Mallarmé lived in London from the year 1862 to 1863. He obtained a credential from London that allowed him to tutor English. To commence his career as a teacher, Stéphane Mallarmé got a job at Tournon where he taught for three years. He then transferred to Besançon and stayed for a year. Later, he moved to Avignon where he was a teacher for four years, and this opened opportunities to teach at various schools in Paris.

Stéphane Mallarmé hated his occupation because he felt it was not his calling and he was not a talented teacher. Nevertheless, he had to continue teaching because he was a father and Stéphane Mallarmé had the responsibility to provide for his family financially. He even had to take up part-time jobs for editing magazines in 1874. In 1877 he wrote a school book, and in1880 he interpreted a course book to get the extra finances.

He also took up a different profession in scripting poems in 1862 besides teaching in the school. Slowly by slowly he started writing articles for magazines. One Charles Baudelaire manipulated his first lyrics. Stéphane Mallarmé then became lost in thought with the subject of actuality and its association with the perfect world. This perspective is reflected in the two outstanding poems that he titled, ‘Hérodiade’ and ‘L’Après-midi dun faune.’

He brought scholars together in his house on the Rue de Rome in Paris; the meeting attracted famous principal musicians, authors and writers the likes of Paul Valéry, André Gide, Paul Verlaine, Oscar Wilde, Rainer Maria Rilke and W.B. Yeats. Painters and sculptors namely Renoir, Monet, Degas, Redon, and Whistler, Rodin had the pleasure to be his audience. He did this while still being able to continue with his teaching career.

Stéphane Mallarmé signed up for an untimely departure in November 1893 by health concerns. This was a scam because in the real sense he just wanted to do away with teaching. On retirement, he had grown to be a distinguished poet. Consequently, he earned the title of the supreme poets alive in France at that time.

On retirement, he had a lot of free time, and that permitted him to use more time at his log cabin at Valvins. It was a community on the banks of the upper Seine near Fontainebleau. It was in his cabin that he took his time to exercise his previous theories. He compiled them in his works ‘Grand Oeuvre’ meaning Great Work or ‘Le Livre’ referring to The Book.’ Unfortunately, this practice remained unfinished due to his sudden death.

In 1876, Stéphane Mallarmé wrote ‘L’Aprés Midi D’un Faun’ meaning ‘The Afternoon of a Faun.’ This poem came to be regarded as one of his best pieces. It was widely celebrated.

During his last years, he wrote a few more pieces. In 1914, he wrote the experimental poem ‘Un Coup de Dés.’ This is an illustration of his last articles that investigated the association amid substance and appearance. It also opened up the distinction of wording and the planning of words and spaces on a page. This piece was made public even after his death.

August 10, 1863, Stéphane Mallarmé tied the knot with his love Maria Christina Gerhard. Together they were blessed with two kids. They had a daughter who they named Geneviève Mallarmé and a son called Anatole.

Although he was a teacher, he had no passion for the job. Being a father to his two kids and husband he had to keep teaching to meet the family financial needs. In a shocking turn of events, Anatole, his son passed away after a six-month torment of a long illness in October 1879. At the young age of 56, Stéphane Mallarmé died unexpectedly on September 9, 1898, in Valvins which is presently known as the Vulaines-Sur-Seine.

Stéphane Mallarmé was among the leading members of a group of writers from France. These writers included Paul Valéry Andre Gide and Marcel Proust in 1880. Having a bohemian lifestyle, he went ahead and named the group ‘The Decadents.’ Together with his group members, Baudelaire and Valéry, they earned their name in poetry and after that came to be recognized as the principals of the Symbolist movement.