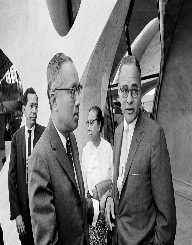 Thant, best known as U Thant was the third Secretary-General of the United Nations who served from 1961 to 1971. Born on January 22, 1909, U Thant became the first non-European to rise to that position. U Thant was appointed the Secretary-General after the death of his predecessor, Dag Hammarskjold. U Thant previously served as a Burmese diplomat and held positions in Burmese Prime Minister U Nu’s government from 1948 to 1961. After the assumption of the position, Thant first challenge was to spearhead negotiations between U.S President, John F. Kennedy, and the Soviet Premier Nikita Khrushchev in the face of the Cuban Missile Crisis in 1962 to foster peace prevent a global catastrophe. In December same year, his operation Grandslam in Congo ended the secessionist insurgency in that country.

During his second term of office in 1966, U Thant openly spoke against the United States military interventions and conducted in the Vietnam War. U Thant also facilitated the entry of newly independent countries in Asia and Africa in the United Nations. After his second term, he refused a third term and therefore retired in 1971. The U that comes with his name is honorific in Burma which can be equated to Mr.

U Thant was born on January 22, 1909, in Pantanaw, colonial Burma to Po Hnit and Nan Thaung. He was the eldest child of four, and his other siblings are Khant, Thaung, and Tin Maung. The family was a moderate wealthy one, and his father had the vision that all his children received a university education. Po Hnit kept a personal library where he collected American and British books. With this, all his children inculcate the habit of reading and Thant as an avid reader was called The Philosopher in school. U Thant was also interested in sporting activities including swimming, hiking and playing chinlone.

U Thant had his education at the National High School in Pantanaw. Thant partook in a strike against the University Act of 1920 when he was just eleven years. At the young age, U Thant dreamt of becoming a journalist in future and started writing articles for the Union of Burma Boy Scouts magazine. Thant lost his father at age fourteen and litigations on his inheritance plunged the family into financial distress. The death of his father had some effects on his education as he could not enrol for four-year university education but instead did a two-year teaching certificate at Rangoon University in 1926.

While there, U Thant studied history with his friend and future Prime Minister U Nu under D.G.E.Hall. Thant held the positions of secretary of the University Philosophical and the Literary and Debating Society. Other persons, U Thant, met during his studies include J.S Furnivall, the founder of The Burma Book Club and The World of Books magazines. Thant was a regular contributor to the later magazine.

After the two-year university education, U Thant returned to Pantanaw to serve as a senior teacher at the National High School in 1928. He continued with his writings as U Thant continued to write articles in partook in The World of Books translation competitions. The also kept close contact with Nu and Furnivall. At age 25 in 1931, U Thant took the first position in the All Burma Teachership Examination to become the school’s headmaster. Under the pen name Thilawa, U Thant contributed to newspapers and magazines and also translated some books including one on the League of Nations.

The Japanese occupied Burma between 1942 to 1945 during the World War II and appointed Thant as a leader of the Educational Reorganisation Committee in Rangoon. Despised with the lack of enough power to institute such changes, he returned to Pantanaw. U Thant resisted the moved by the Japanese to make Japanese a compulsory language in Pantanaw and with this joined the anti-Japanese resistance. U Nu became the Prime Minister of Burma after it gained independence from the United Kingdom in 1948 and U Thant appointed Thant as director of broadcasting that same year.

Shortly after their independence, there was a civil war, and U Thant served as a mediator risking his life to go to Karen camps to broker peace. This could however not sustain as the insurgent advanced to Pantanaw and burned down the town including his house in 1949. Their activities were curtailed as they tried to push to the capital Rangoon. U Thant was appointed to the Ministry of Information in 1950 and from 1951 to 1957, became the secretary of prime minister U Nu.

As the secretary, U Thant was in charge of meeting foreign visitors and arranging international trips and also became U Nu’s advisor and close confidant. With his position, he participated in several international conferences, and 1955 was appointed the secretary of the Bandung Conference in Indonesia, which brought about the Non-Aligned Movement. Thant became Burma’s permanent representative to the United Nations from 1957 to 1961.U Thant was appointed the Chairman of the UN Congo Commission in 1961.

While en route to Congo in September 1961, the United Nations Secretary-General, Dag Hammarskjold was involved in a plane crash and died. The search for his successor began, but the United States and the Soviet Union’s disagreement on the choice of person dragged the procedure for weeks. Although the two superpowers initially turned down the proposal to make U Thant Secretary, they later came to a consensus and unanimously, voted him as the acting Secretary-General by the General Assembly on November 3, 1961, to serve a five-year term.

U Thant was highly praised for his role in ending the civil war in Congo by ordering Operation Grandslam and also defusing the Cuban Missile Crisis which could have brought about the first nuclear war among the two superpowers, U.S and the Soviet Union. Thant was given a second term by the General Assembly on December 2, 1966, to expire on December 31, 1971. His second term of office saw him enter newly independent countries from Asia and Africa into the United Nations.

U Thant instituted several UN development and environmental agencies including the UN Development Programme, United Nations Conference on Trade and Development, UN University, and the United Nations Environmental Programme among several others. His term also witnessed the Six-Day War between Arab countries and Israel, the Prague Spring invasion of Soviet in Czechoslovakia and the Indo-Pakistani War of 1971. U Thant retired at the end of his second tenure stating that he would not seek the third term under any circumstances.

U Thant was married to Daw Thein Tin. The couple had three, two sons Maung Bo and Tin Maung Thant but lost both died and a daughter. Tin Maung died after he fell from a bus during a visit to Yangon and Maung Bo also died in infancy. U Thant later adopted a son.U Thant died on November 25, 1974, of lung cancer in New York. After his death, he was refused state burial any formal national honor since Burma was under a militia junta, which shared parallel views with U Thant. U Thant was rather close to the former government headed by his friend U Nu, which was overthrown in a coup d’état on March 2, 1962, by Ne Win who subsequently became the president of the country.

U Thant with his personal reasons declined several awards and honors. At a point in time, U Thant declined the second highest honor in Burma, which was awarded him by U Nu’s government in 1961.

U Thant was awarded the Jawaharlal Nehru Award for International Understanding in 1965 and Gandhi Peace Award. Thant received several honorary degrees from institutions like the Carleton University, Harvard University, University of California at Berkeley, Yale University, Moscow University and Hamilton College among several others.