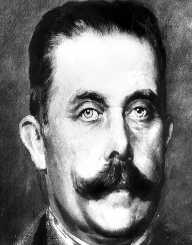 Archduke Franz Ferdinand entered the Austro-Hungarian Army at a young age. With frequent promotions, he reaches the rank of lieutenant at the age of fourteen, a captain at 22 and colonel at 27. At age 31, he was already a major general and at a point briefly commanded the primarily Hungarian 9th Hussar Regiment.

Archduke Franz Ferdinand was given a commission "at the special disposition of His Majesty" in 1898 and with that could make inquiries in depth into the activities of the military services while the military agencies were commanded to share papers with him. As the heir presumptive, Archduke Franz Ferdinand was appointed the inspector general of all the armed forces of Austro-Hungary (Generalinspektor der gesamten bewaffneten Macht) in 1913.

On July 1, 1900, Archduke Franz Ferdinand was married to Sophie Chotek in a morganatic marriage, as she was not a member of the Imperial House of Habsburg. The two were married in Reichstadt, currently Zakupy in Bohemia with most of the members of the imperial family not attending the wedding to demonstrate their objection to the marriage. Sophia, on the other hand, was stripped of almost all privileges as a will be queen and was given the title, "Princess of Hohenberg" (Fürstin von Hohenberg). The couple had four children including Princess Sophie of Hohenberg, Maximilian, Duke of Hohenberg, Prince Ernst of Hohenberg and a stillborn.

Archduke Franz Ferdinand and Sophie Chotek died on June 28, 1914, in Sarajevo, the capital of Bosnia and Herzegovina by Gavrilo Princip, a member of the Young Bosnia, a group organized and armed by the Black Hand. His assassination ultimately led to the World War I. The event started with a grenade attack on the couple car by Nedeljko Cabrinovic by narrowly escaped as it detonated behind them rather hurting those in a car behind. As he reached the Governor’s residence, Archduke Franz Ferdinand furiously shouted "So this is how you welcome your guests — with bombs?!" after some rest; the couple decided to visit those who got injured at a local hospital. As their car was in line with others on the street Princip who was at the time at a café across to the street walked to the couple car and shot them.

Archduke Franz Ferdinand was shot in the neck and his wife in the abdomen with a pocket-sized FN Model 1910 pistol, which was provided by Serbian Army Colonel and Black Hand member Dragtutin Dimitrijevic. Archduke Franz Ferdinand died a few minutes later with his last words 'Don't die, darling, live for our children.' His wife also died soon after on the way to the hospital. This assassination coupled with the arms race, imperialism, nationalism, militarism and the forming of alliances led to the World War I with Austria-Hungary declaring war on Serbia. Franz Ferdinand and his wife Sophia were interred in Artstetten Castle in Austria.