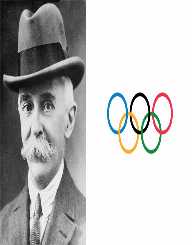 Pierre De Coubertin is still remembered as an all-star man who loved to pas-time with games like rowing, horse riding, boxing, and fencing. He was also an educationalist who made an effort in reforming the French education system. He was more concerned about sports education since he assumed it as his first potential.

Pierre’s principal aim was to establish what he called the ‘moral energy’ this made him chair the USFSA-Secretary-General of the Union of French Societies of Athletic Sports. His urge for sports made him announce that he will attempt to revive the Olympic Games. His dreams came true when The First Olympic Games commenced in 1896 in Athens. For 29 good years, Pierre led the International Olympic Committee.

On January 1, 1863, Pierre de Fredy was born in France, Paris to Baron de Coubertin and Agathe Marie Marcelle. His father was famously known as a loyal royalist and a remarkable artist. Pierre grew up in a political upheaval surrounding. Coubertin was quite disturbed due to the occurrence of Franco-Prussian War where they were defeated at the end.

In 1874 Pierre De Coubertin enrolled at Jesuit school named as Externet de la rues de Vienne. He tremendously got top student fame, all thanks to his intelligence. In the mid of 1880, Pierre received his bachelor’s degree in literature in 1880. Being raised in a wealthy family, Coubertin had a chance to select high ranked schools and career courses. For this, he teamed up with Military School of Saint-Cyr where he majored in military services. He dropped out after realizing that he can’t stand the expertise wanted. He later joined the Law Faculty of the Political Sciences School.


An Athletics Enthusiast and Staunch Traveler

Pierre De Coubertin made several trips to the campus of Yale University where he familiarized himself with the American Colleges field of athletics. From 1880 to 1890 he traveled back and forth to England and Europe in search of good athletics system. The French Government came to love his work where he was summoned to work for athletic congress. Here he majored in his favorite events such as fencing and riding.

Unfortunately, Pierre’s plan to revive the education scheme of France didn’t materialize. Either way, his traveling ideas played a significant role that made him plan for more. He created athletic events with the aim of raising the Olympic game awareness. In that case, he managed to set up a productive meeting where 12 countries discussed the way forward. Luckily the conference brought positive remarks after establishing its first International Olympic Committee in Greece.

Coubertin’s decision of setting up the opening of the modern Olympics in Athens was illustrative. But it also brought the city of Greece political mayhems. All in all, Pierre hosted the first game on April 5, 1896. The athletic festival continued for ten days. The availed events included tennis, foot races, fencing, rowing, and bicycle races among others.

The first Olympics brought immense success to Greece and Pierre’s ambition. But the Olympic Movements also faced countable hardship such as the 1900s Games that failed in the middle. Luckily the 1906 Olympic was a success that helped to create The first World’s Olympic Games competition. After an extended period of waiting, another major tournament was held at the Olympic Games in Stockholm where it received all types of recognition.

Besides being an athletic in nature, Pierre De Coubertin planned to preach peace as he continued to bring out hidden talents. He possessed a never give up soul that made him promote several games. In the process, he attained peaceful connections in countable countries. His in-depth commitment made him use his wealth where he suffered more during the World War I.

In the mid of 1924 Paris welcomed another Olympic Game where it brought nothing else but resounding success. The outcome satisfied the power-hungry Pierre De Coubertin.

From 1912 to 1936 Pierre De Coubertin won several accolades such as the Gold Medal for literature for his touching poem ‘Ode to Sport.' He followed it up with Virginia Heriot Prize and the IRB Hall of Fame for his undefined services. In 1895 Pierre married Marie Rothan, and they were blessed with two children. The great sports enthusiast died on September 2, 1937, from a heart attack.